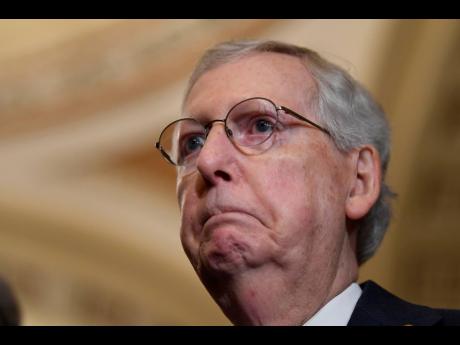 Senate Republican leader Mitch McConnell on Tuesday explicitly placed blame on President Donald Trump for the deadly riot at the Capitol, saying the mob was “fed lies” and that the president and others “provoked” those intent on overturning Democrat Joe Biden’s election.

McConnell’s remarks as he opened the Senate were his most severe and public rebuke of outgoing President Donald Trump. The Republican leader vowed a “safe and successful” inauguration of Biden today at the Capitol, which is under extremely tight security.

“The mob was fed lies,” McConnell said. “They were provoked by the president and other powerful people, and they tried to use fear and violence to stop a specific proceeding of the first branch of the federal government which they did not like.”

Trump’s last full day in office Tuesday was also senators’ first day back since the deadly Capitol siege, an unparalleled time of transition as the Senate presses ahead to his impeachment trial and starts confirmation hearings on Biden’s Cabinet.

Three new Democratic senators-elect are set to be sworn into office Wednesday shortly after Biden’s inauguration at the Capitol, which is under extreme security since the bloody pro-Trump riot. The new senators’ arrival will give the Democrats the most slim majority, a 50-50 divided Senate chamber, with the new vice president, Kamala Harris, swearing them in and serving as an eventual tie-breaking vote.

The start of the new session of Congress will force senators to come to terms with the post-Trump era, a transfer of power like almost none other in the nation’s history. Senators are returning to a Capitol shattered from the riot, but also a Senate ground to a halt by the lawmakers’ own extreme partisanship.