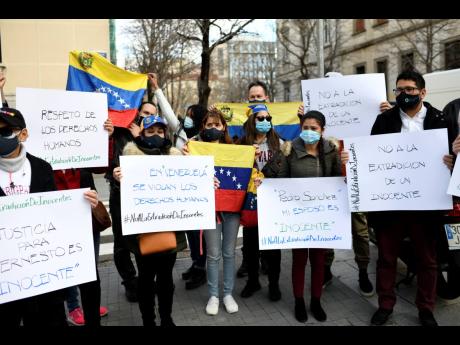 Spain’s National Court has approved the extradition of a financial broker wanted in Venezuela on charges of fraud and embezzlement of funds.

The ruling on 40-year-old Ernesto Quintero triggered protests Friday among the Venezuelan community in Spain and Venezuelan opposition representatives.

Protesters, including Quintero’s wife, demonstrated near the court in Madrid, calling for Spain to stop the extradition given the political instability in the Central American country.

Quintero worked in a stock exchange in the western Venezuelan city of Marcaibo that was seized by authorities in 2010 due to alleged fund-management irregularities, the unauthorised sale of client investments and for funnelling money to Britain’s Virgin Islands.

He was arrested in Spain early in 2019, but released with conditions while his extradition was studied. He was detained again this week.

The court’s three-judge panel rejected Quintero’s argument that there were political motivations behind Venezuela’s extradition request and that he would be in physical danger if handed over.

Antonio Ecarri, a Venezuelan politician designated as ambassador to Spain for the parallel government of Venezuelan opposition leader Juan Guaidó, claimed that any extradition now was a virtual death sentence given Venezuela’s human rights record.

Spain has previously rejected other extradition requests from Venezuela on human rights grounds.

The ruling can be appealed.