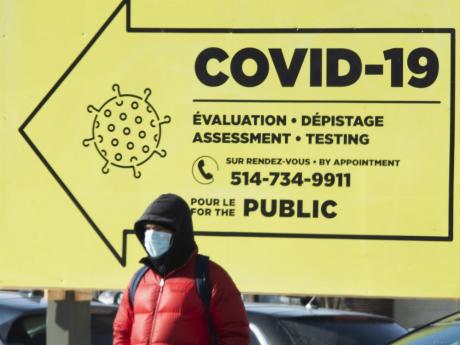 A man bundles up against the cold and wears a face mask for safety from COVID-19 as he walks past a testing clinic Friday, February 12, 2021, in Montreal. (Ryan Remiorz/The Canadian Press via AP)

It is the third COVID-19 vaccine given the green light by Canada, following those from Pfizer and Moderna.

“This is very encouraging news. It means more people vaccinated, and sooner,” Prime Minister Justin Trudeau said, adding that the nation of 38 million people will now get 6.5 million vaccines in total before the end of March, 500,000 more now with the new approval.

Health Canada approved the AstraZeneca vaccine for use in people 18 and over, expressing confidence it would work for the elderly even though some countries, including France, have authorised it only for use in people under 65, saying there is not enough evidence it works in older adults.

With trials showing about 62% efficacy, the vaccine appears to offer less protection than those already authorised, but experts have said any vaccine with an efficacy rate of over 50% could help stop the outbreak

Sharma said no one has died or become severely ill in trials of the vaccines now approved by Canada or in those of Johnson & Johnson and Novavax shots, which could be approved soon.

Health authorities in Germany and other countries have raised concerns that AstraZeneca didn’t test the vaccine in enough older people to prove it works for them and indicated they would not recommend it for people over 65.

Belgium has authorised it only for people 55 and under.

Canada has now ordered 22 million doses of the AstraZeneca shot, which was co-developed by researchers at the University of Oxford.

It will also receive up to 1.9 million doses through the global vaccine-sharing initiative known as COVAX by the end of June.