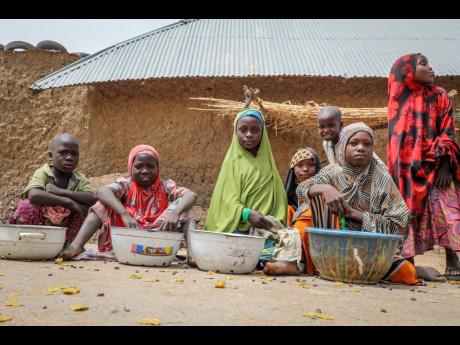 AP
Children play and sell small foodstuffs on the street in the town of Jangebe, where more than 300 girls were abducted by gunmen on Friday from the Government Girls’ Junior Secondary School in Zamfara state, northern Nigeria.

Pope Francis on Sunday decried the kidnapping of 317 students from their boarding school in northwest Nigeria and prayed for the girls' quick release.

Addressing the public in St Peter's Square, Francis said he was adding his voice to others, including Nigeria's bishop, in condemning what he described as "the vile abduction" of the girls.

Police on Friday in Nigeria said gunmen had abducted the students from their boarding school. Several large groups of armed men operate in the area and are known to kidnap for ransom money and the release of their jailed cohorts.

"I pray for these girls so that they may return home soon,'' the pope said. "I am close to their families and to them,'' Francis said, asking people to join him in prayer.

A resident of the area said the gunmen also attacked a nearby military camp and checkpoint, preventing soldiers from interfering with the mass abduction.

On Saturday, authorities in Nigeria announced that nearly 40 students, teachers and relatives abducted on February 17 from a school in northern Nigeria have been freed.