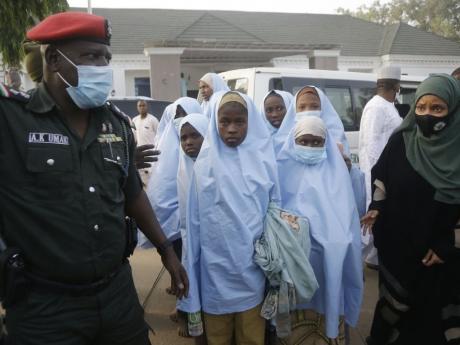 Some of the students who were abducted by gunmen from the Government Girls Secondary School in Jangebe last week wait for a medical checkup after their release meeting with State Governor Bello Matawalle in Gusau, northern Nigeria, Tuesday, March 2, 2021. Matawalle announced that 279 girls who were abducted last week from a boarding school in the northwestern Zamfara state have been released Tuesday. (AP Photo/Sunday Alamba)

GUSAU, Nigeria (AP) — Hundreds of Nigerian girls abducted last week from a boarding school in the country’s northwest have been released, a state governor said Tuesday, ending the latest in a spate of such kidnappings in the West African nation.

The girls, ages 10 and up, dressed in light blue hijabs and barefoot, packed into Zamfara state’s Government House conference room.

They appeared calm, chatting to one another as they sat in long rows while journalists photographed them.

They will receive a medical checkup before being returned to their parents.

Zamfara Governor Bello Matawalle said that 279 girls had been freed after being abducted from the Government Girls Junior Secondary School in Jangebe town on Friday.

The government last week said 317 had been kidnapped. It was not clear if the higher number was an error or if some girls were still missing.

“Alhamdulillah! (God be praised!) It gladdens my heart to announce the release of the abducted students,” Matawalle said in a post on Twitter early Tuesday.

“I enjoin all well-meaning Nigerians to rejoice with us as our daughters are now safe.”

Officials said “bandits” were behind the abduction, referring to the groups of armed men who operate in Zamfara state and kidnap for money or to push for the release of their members from jail.

At the time of the attack, one resident told The Associated Press that the gunmen also attacked a nearby military camp and checkpoint, preventing soldiers from responding to the school.

One of the girls recounted the night of their abduction to the AP.

“We were sleeping at night when suddenly we started hearing gunshots. They were shooting endlessly. We got out of our beds and people said we should run, that they are thieves,” she said.

Officials ended the interview before the girl could give her name.

The attackers eventually found her and some classmates and held guns to their heads, she said.