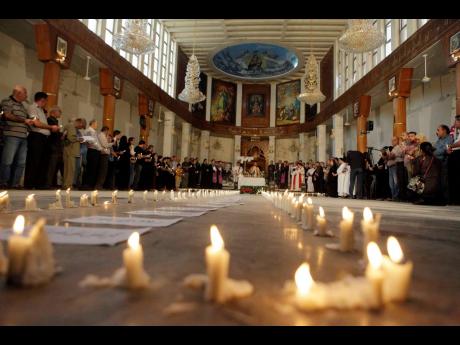 The Associated Press
In this Nov 7 2010 photo, followers attend a mass at Our Lady of Salvation church in Baghdad, Iraq. Iraqi Christians have gathered for mass in the same church that just a week before was the scene of a horrific bloodbath that left scores dead and wounded. Pope Francis is pushing ahead with the first papal trip to Iraq despite rising coronavirus infections, hoping to encourage the country’s dwindling number of Christians who were violently persecuted during the Islamic State insurgency while seeking to boost ties with the Shiite Muslim world. 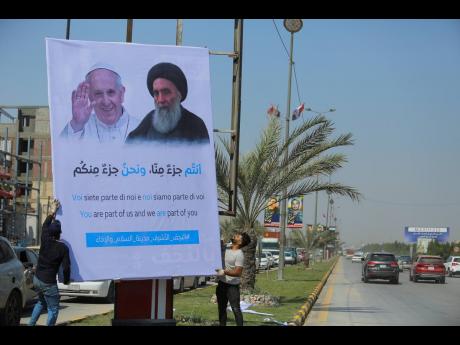 Anmar Khalil
Iraqis put up a poster announcing the upcoming visit of the Pope Francis and a meeting with a revered Shiite Muslim leader, Grand Ayatollah Ali al-Sistani (right), in Najaf, Iraq, yesterday.
1
2

Pope Francis is pushing ahead with the first papal trip to Iraq despite rising coronavirus infections, hoping to encourage the country’s dwindling number of Christians who were violently persecuted during the Islamic State’s (IS) insurgency while seeking to boost ties with the Shiite Muslim world.

Security is a concern for the March 5-8 visit, given the continued presence of rogue Shiite militias and fresh rocket attacks. Francis, who relishes plunging into crowds and zipping around in his popemobile, is expected to travel in an armoured car with a sizeable security detail. The Vatican hopes the measures will have the dual effect of protecting the pope while discouraging contagion-inducing crowds.

Francis’ visit is the culmination of two decades of efforts to bring a pope to the birthplace of Abraham, the prophet central to Christian, Muslim and Jewish faiths, after St John Paul II was prevented from going in 1999.

“We can’t disappoint this people a second time,” Francis said Wednesday in urging prayers for the trip.

The trip will give Francis – and the world a – close-up look at the devastation wrought by the 2014-2017 IS reign, which destroyed hundreds of Christian-owned homes and churches in the north, and sent tens of thousands of Iraqi Christians and other religious minorities fleeing.

The trip will include a private meeting with Iraq’s top Shiite cleric, Grand Ayatollah Ali al-Sistani, a revered figure in Iraq and beyond.