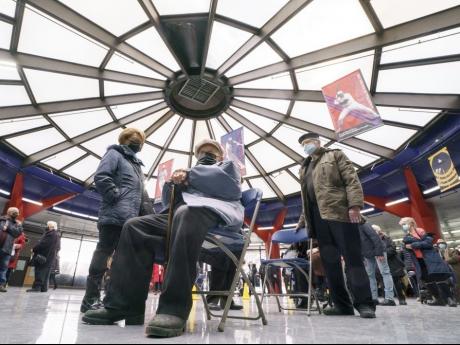 People wait in line at a COVID-19 vaccine at a clinic at Olympic Stadium marking the beginning of mass vaccination in the Province of Quebec based on age in Montreal, on Monday, March 1, 2021. (Paul Chiasson/The Canadian Press via AP)

TORONTO (AP) — Canada is getting a fourth vaccine to prevent COVID-19 as the country’s health regulator has cleared a Johnson & Johnson shot that works with just one dose instead of two, officials said Friday.

Health experts are eager for a one-and-done option to help speed vaccination.

Like many countries, Canada does not have domestic production and has struggled with an immediate shortage of vaccines.

The US so far isn’t allowing locally made vaccines to be exported, so Canada — like the other US neighbour, Mexico — has been forced to get vaccines from Europe and Asia.

Canada has pre-purchased 10 million Johnson & Johnson doses, with options to buy another 28 million.

It was not immediately clear when Canada would get its first shipment.

“This is the fourth vaccine to be deemed safe by Canada’s health experts — and with millions of doses already secured, we’re one stop closer to defeating this virus,” Prime Minister Justin Trudeau tweeted.

The US approved Johnson and Johnson last month.

The US Food and Drug Administration said J&J’s vaccine offers strong protection against what matters most: serious illness, hospitalisations and death.

One dose was 85% protective against the most severe COVID-19 illness in a massive study that spanned three continents — protection that remained strong even in countries such as South Africa, where the variants of most concern are spreading.

J&J also is seeking authorisation for emergency use of its vaccine in Europe and from the World Health Organization.

The company aims to produce about 1 billion doses globally by the end of the year.

Last month, the island nation of Bahrain became the first to clear its use.

The vaccine shortage is so acute in Canada that provincial governments are now saying they will extend the interval between the two doses of Pfizer, Moderna and AstraZeneca vaccines to four months rather than three to four weeks so they can quickly inoculate more people.

“It is a reasonable recommendation. If we can get earlier doses, we don’t have to wait for four months to give second doses if the supply opens up,” Sharma said.

Canadians 80 and above in the general public are only starting to get vaccinated this month and the National Advisory Committee on Immunization said this week that extending the dose interval to four months would allow as many as 80% of Canadians over the age of 16 to receive a single dose by the end of June simply with the expected supply of Pfizer-BioNTech and Moderna vaccines.