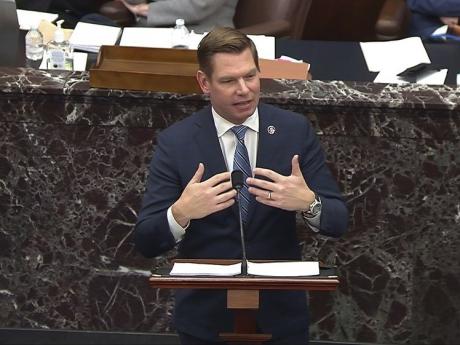 In this image from video, House impeachment manager Eric Swalwell speaks during the second impeachment trial of former President Donald Trump in the Senate at the US Capitol in Washington, Wednesday, February 10, 2021. (Senate Television via AP)

WASHINGTON (AP) — Representative Eric Swalwell, who served as a House manager in Donald Trump’s last impeachment trial, filed a lawsuit Friday against the former president, his son, a lawyer, and a Republican congressman whose actions he charges led to January’s insurrection.

The California Democrat’s suit, filed in federal court in Washington, alleges a conspiracy to violate civil rights, along with negligence, inciting a riot and inflicting emotional distress.

It follows a similar suit filed by Representative Bennie Thompson last month in an attempt to hold the former president accountable in some way for his actions on January 6, following his Senate acquittal.

Swalwell charges that Trump, his son Donald Jr., along with former New York City Mayor Rudy Giuliani and Republican Representative Mo Brooks of Alabama, had made “false and incendiary allegations of fraud and theft, and in direct response to the Defendant’s express calls for violence at the rally, a violent mob attacked the US. Capitol.”

The lawsuit spells out in detail how the Trumps, Giuliani and Brooks spread baseless claims of election fraud, both before and after the 2020 presidential election was declared, and charges that they helped to spin up the thousands of rioters before they stormed the Capitol. Five people died as a result of the violence on January 6, including a US Capitol police officer.

“Now, after failing miserably with two impeachment hoaxes,” Swalwell is attacking “our greatest President with yet another witch hunt,” Miller said in a statement.

“It’s a disgrace that a compromised Member of Congress like Swalwell still sits on the House Intelligence Committee.”

Brooks said the lawsuit was frivolous and “a meritless ploy.”