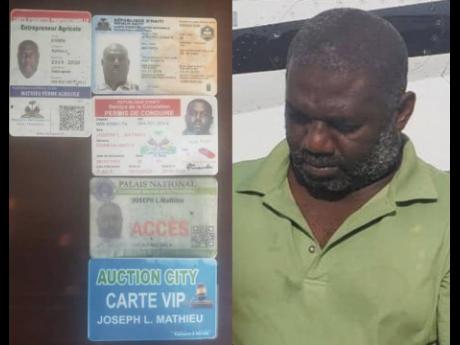 Lissner Mathieu (right) had several ID cards, some carrying the surname Joseph, when he was arrested by police.

Authorities have denied that one of the two men turned over to authorities of the United States Federal Bureau of Investigation (FBI) and Drug Enforcement Administration (DEA) last week was an employee of the National Palace.

Lissner Mathieu, a 55-year-old naturalised American citizen, who skipped out on probation imposed on him after he was convicted of drug charges in the US, was arrested by the National Police of Haiti and flown to the US with FBI and DEA agents last Friday, along with Peter Benjamin, a gang member tied to kidnappings.

However, in a statement on Monday, Secretary General of the Presidency Lyonel Valbrun, said Mathieu, who also goes by the alias Ti-Nwa and has used the surname Joseph on various ID cards, was not employed by the National Palace.

“Mathieu Lissner Joseph holds an access badge, as [do] other suppliers and subcontractors offering professional services to the administration of the National Palace, in accordance with the law,” Valbrun said, urging Haitians to be “cautious in the face of this campaign of intoxication and manipulation of public opinion”.

“The Secretary General of the Presidency welcomes the cooperation between the Haitian and American authorities and wishes to recall that the fight against drug trafficking and organised crime remains one of the priorities of the Jovenel Moïse administration.”

Mathieu pleaded guilty in 2006 to conspiring to import at least five kilogrammes of cocaine into the US and received a 10-year probation period. However, he fled to Haiti in 2008 and had been sought for violating the terms of his probation.