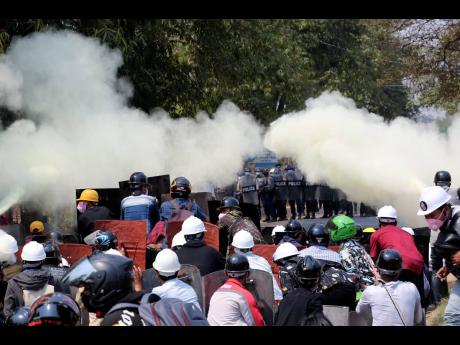 AP
Anti-coup protesters discharge fire extinguishers to counter the impact of the tear gas fired by police during a demonstration in Naypyitaw, Myanmar, yesterday.

Demonstrators in Myanmar’s biggest city came out on Monday night for their first mass protests in defiance of an 8 p.m. curfew, seeking to show support for an estimated 200 students trapped by security forces in a small area of one neighbourhood.

The students and other civilians earlier took part in one of the many daily protests across the country against the military’s seizure of power last month that ousted the elected government of Aung San Suu Kyi.

The military government also placed a major curb on media coverage of the crisis. It announced that the licences of five local media outlets — Mizzima, DVB, Khit Thit Media, Myanmar Now, and 7Day News — have been cancelled.

“These media companies are no longer allowed to broadcast or write or give information by using any kind of media platform or using any media technology,” it said on state broadcaster MRTV.

All five had been offering extensive coverage of the protests, often with live streaming video online. The offices of Myanmar Now were raided by the authorities on Monday before the measure was announced. The government has detained dozens of journalists since the coup, including a Myanmar Now reporter and Thein Zaw of The Associated Press, both of whom have been charged under a public-order law that carried a penalty of up to three years in prison.

The night’s street protests began after police cordoned off part of Yangon’s Sanchaung neighbourhood and were believed to be conducting door-to-door searches for those who fled attacks by security forces to seek shelter in the homes of sympathetic strangers.

News of their plight spread quickly on social media, and people poured into the streets in neighbourhoods all over the city to show solidarity and in hopes of drawing some of the pressure off the hunted protesters. On some streets, they constructed makeshift barricades with whatever was at hand.

In the Insein district, they spread across road junctions, singing songs, chanting pro-democracy slogans, and banging objects together.

The diplomatic missions of the United States, Britain, Canada, and the European Union all issued statements urging the security forces to allow the trapped people to return safely to their homes. Although all have been sharply critical of the February 1 coup and police violence, it is unusual for such diplomatic statements to be issued in connection with a specific, ongoing incident.

“There is heightened tension caused by security forces surrounding Kyun Taw Road in Sanchaung Township, Yangon. We call on those security forces to withdraw and allow people to go home safely, ” said the US Embassy’s statement.

By midnight Myanmar time, there had been no reports of clashes between police and protesters although security forces chased crowds, harassed residents watching from windows, and fired stun grenades. They also were some reports of injuries from rubber bullets.

The Irrawaddy online newspaper said the victims were shot in the head during anti-coup protests in Myitkyina in Kachin State. Graphic video on social media showed protesters backing away from tear gas, responding with rocks and then fleeing after a fusillade of what seemed to be automatic gunfire.

Demonstrators hurriedly carried away the injured, including one apparent fatality, a person with a severe head wound. A second body was seen later on a stretcher, his head covered with a cloth.

Another shooting death took place in Pyapon, a city about 120 kilometres (75 miles) south of Yangon.

To date, the government’s violent crackdown has left more than 50 protesters dead. At least 18 people were fatally shot on February 28 and 38 on Wednesday, according to the UN Human Rights Office.