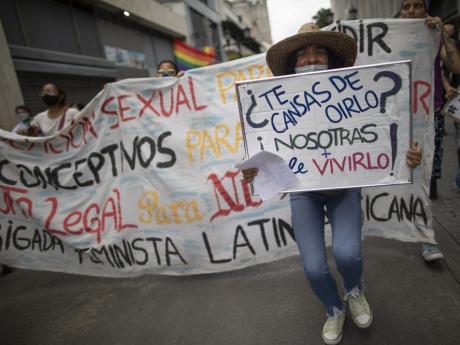 Women from the feminist group "Tinta Violeta" march during a protest marking International Women's Day and demanding justice for women who have been victims of violence in Caracas, Venezuela, Monday, March 8, 2021. (AP Photo/Ariana Cubillos)

WASHINGTON (AP) — The Biden administration said Monday it is offering temporary legal residency to several hundred thousand Venezuelans who fled their country’s economic collapse and will review US sanctions intended to isolate the South American nation.

Both measures mark a shift from US policy toward Venezuela under President Donald Trump.

President Joe Biden’s administration announced it would grant temporary protected status to Venezuelans already in the United States, allowing an estimated 320,000 people to apply to legally live and work in the country for 18 months.

Trump resisted repeated calls from Republican and Democratic lawmakers, primarily from South Florida, to grant temporary protected status to Venezuelans though he issued an order deferring deportation for a smaller number on his final day in office.

The Trump administration also significantly tightened US economic sanctions on Venezuela, most notably on its crucial oil sector, to try and force President Nicolas Maduro to give up power after an election in 2018 that the United States and more than 50 other countries consider fraudulent.

A senior Biden administration official portrayed that as a failed strategy.

“The United States is in no rush to lift sanctions,” the official said, speaking to reporters on condition of anonymity to discuss the policy.

“But we need to recognise here that unilateral sanctions over the last four years have not succeeded in achieving an electoral outcome in the country.”

US sanctions, which began under President Barack Obama, have increased economic pressure on the once-prosperous country.

Its economy was already suffering from mismanagement and the deterioration of its all-important oil industry.

Citizens of 10 countries, totalling about 400,000 people, are in the United States now with temporary protected status.

The largest number come from El Salvador, Honduras and Haiti, many with US citizen children and spouses.

The Trump administration had sought to phase out the programme, arguing that it had effectively become permanent residency after repeated extensions.