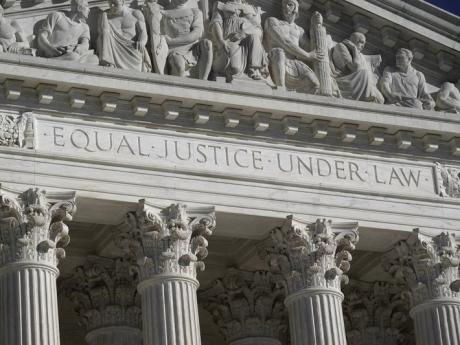 CHICAGO (AP) — A Trump-era immigration rule denying green cards to immigrants who use public benefits like food stamps was dealt likely fatal blows Tuesday after the Biden administration dropped legal challenges, including before the Supreme Court.

Continuing to defend the rule “is neither in the public interest nor an efficient use of limited government resources,” the US Department of Homeland Security said in a statement.

The Supreme Court won’t weigh in on the legality of the so-called public charge rule because of an agreement by the Biden administration and the parties and states challenging it.

The Justice Department also dropped objections to a ruling before the 7th US Circuit Court of Appeals, upholding a federal judge’s November order striking down the rule nationwide.

The justices, at the administration’s request, also put off cases they had agreed to hear over the funding of portions of the wall along the border with Mexico and the policy of forcing asylum seekers to wait in Mexico for their hearings

While Trump’s administration touted the rule first proposed in 2018 as a way to ensure only those who are self-sufficient come to the U.S., immigrant rights advocates said it amounted to a “ wealth test” and public health experts said it would lead to poorer health outcomes.

Under the Trump administration policy, applicants for green cards had to show they wouldn’t be burdens to the country or “public charges.”

Federal law already required those seeking permanent residency or legal status to prove they wouldn’t be a “public charge.”

But the Trump administration rule included a wider range of programmes that could disqualify them.