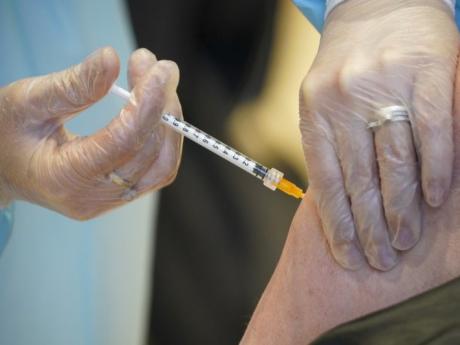 A health worker administers a dose of the AstraZeneca vaccine against COVID-19 to a patient inside the convention center known as "La Nuvola", The Cloud, in Rome on Wednesday, March 10, 2021. The visually extraordinary complex designed by famed architect Massimiliano Fuksas has been transformed into a temporary vaccination center. (AP Photo/Andrew Medichini)

COPENHAGEN, Denmark (AP) — Denmark has temporarily suspended the use of the AstraZeneca coronavirus vaccine after reports of blood clots in some people, but its health authority said Thursday it has no evidence the vaccine was responsible.

Other experts pointed out that of the millions of AstraZeneca vaccine shots administered elsewhere, including in Britain, there have been no reported cases of the vaccine causing blood clots or related problems.

Denmark’s Health Authority said its decision was “based on a precautionary principle” and that one person who developed a blood clot after vaccination had died.

“At present, it cannot be concluded whether there is a link between the vaccine and the blood clots,” authorities said.

Danish officials did not say whether the patient had any underlying conditions and did not provide any other details.

In a statement on Thursday, the European Medicines Agency said “the vaccine’s benefits continue to outweigh its risks and the vaccine can continue to be administered” while a closer evaluation of the blood clot cases continues.

“There is currently no indication that vaccination has caused these conditions,” the regulator said.

It said the number of people with blood clots in vaccinated people was no higher than those who hadn’t been inoculated.

Some doctors pointed out that people now being immunised against COVID-19 are more likely to already have health problems and that it would be difficult to determine whether a vaccine shot is responsible.

“The vast majority of people being vaccinated at the moment are elderly or have got underlying diseases,” said Dr Paul Hunter, a professor of medicine at the University of East Anglia.

“They will be at increased risk for all sorts of adverse outcomes, regardless of whether or not they have been vaccinated.”

Hunter said there were 11 reports of blood clots in Britain among the more than 11 million people given the AstraZeneca vaccine, and none have been shown to have been caused by the shot.

He said pausing immunisations was also a risky decision in itself.

“When you stop vaccinating, you know that some people will die of COVID-19,” he said.

Denmark’s suspension of the AstraZeneca vaccine will last for at least two weeks, the agency said, adding it hinged on an evaluation by the EU medical regulator.

After the Danish announcement, Norway decided to follow suit and temporarily suspend the Anglo-Swedish company’s vaccine, which was developed by the University of Oxford, also saying that there are no proven links.

In addition, Italy’s pharmaceutical agency on Thursday ordered a precautionary ban on a particular batch of the AstraZeneca vaccine after what it said were “serious adverse events.”

On Wednesday, the EMA said Austria had suspended the use of a batch of COVID-19 vaccine made by AstraZeneca after a person had been diagnosed with multiple blood clots died 10 days after vaccination, and another was hospitalised with a blockage in arteries in the lungs after being vaccinated.

The latter is now recovering.

Two other reports of similar problems had been received for this batch as of March 9, the EMA said, though there is no indication that the problems were caused by the vaccine.

The EMA said the one million-dose batch in question was delivered to 17 EU countries.