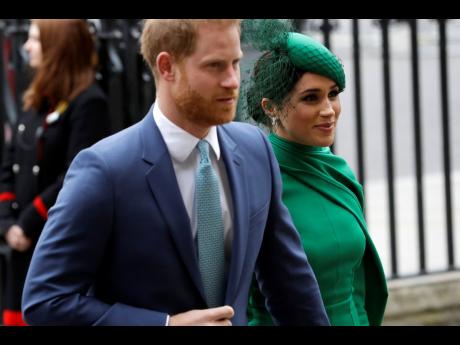 AP
Britain’s Harry and Meghan the Duke and Duchess of Sussex arrive to attend the annual Commonwealth Day service at Westminster Abbey in London in March 2020.

Buckingham Palace’s response to Prince Harry and Meghan’s allegations of racism and mistreatment has failed to quiet the controversy, with some observers criticising the royal family for not forcefully condemning racism and suggesting the couple’s version of events may not be accurate.

“Too little, too late” was the verdict of royal commentator Peter Hunt, who also criticised the palace’s 61-word statement for saying the issue would be dealt with privately as a family matter.

“This delayed, tame statement went for predictability when unpredictability – stepping out of the Windsor comfort zone – was what was needed,” Hunt wrote on the website of the influential British magazine The Spectator.

The statement, issued on behalf the queen, was released 36 hours after the interview of the Duke and Duchess of Sussex by Oprah Winfrey was broadcast in the United States.

The comments were the palace’s first word since the interview rocked the royal family – and touched off conversations around the world about racism, mental health and even the relationship between Britain and its former colonies.

Those tensions only built as the public waited to see how the royal family would respond.

The statement should lower the temperature of the debate, but media interest in the story isn’t going away and there will be pressure for the palace to publicly address Harry and Meghan’s concerns, said Ed Owens, a historian of British monarchy and author of T he Family Firm: Monarchy, Mass Media and the British Public, 1932-53.

“There are big questions here that need to be answered, and I think the press, both in the UK, Europe and in the USA, are going to continue to ask questions about the family relationship that exists between Harry and Meghan and the Windsors in the UK,” Owens said.

Meghan, who is biracial, said in the interview she was so isolated and miserable as a working member of the royal family that she had suicidal thoughts, yet when she asked for mental health assistance from the palace’s human resources staff, she was told they couldn’t help because she wasn’t a paid employee. She also said Harry told her there were “concerns and conversations” about the colour of her baby’s skin when she was pregnant with their son, Archie.

Many people have backed Meghan, saying the allegations demonstrate the need for change in an institution that hasn’t kept pace with the #MeToo and Black Lives Matter movements. Others stand behind the royal family, criticising the couple for making their damning allegations at a time when Harry’s 99-year-old grandfather, Prince Philip, remains hospitalised in London after a heart procedure.

Anna Whitelock, director of the Centre for the Study of Modern Monarchy at Royal Holloway, University of London, said the palace’s brief message had “hardened the lines” between people who believe the monarchy is an outdated bastion of inherited white privilege and those who see it as cherished national institution.

Fallout from the interview is likely to fuel the debate over the future of the monarchy and its role both in Britain and the other countries for which the queen serves as head of state, Whitelock said. Besides the UK, the queen remains the head of state for 15 countries, most of which were once part of the British Empire, including Australia, Canada, New Zealand and island nations in the Caribbean.

“That’s a debate that’s been held in check, in large part, given the length of the queen’s reign and in respect to her and the role that she’s played,” Whitelock said. “But it’s going to happen, and it’s just a question of when, not if.”