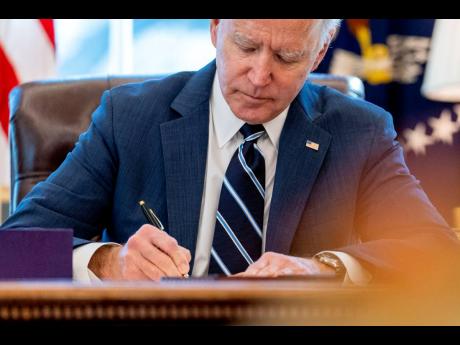 AP
President Joe Biden signs the American Rescue Plan, a coronavirus relief package, in the Oval Office of the White House, on Thursday.

Marking a year of loss and disruption, President Joe Biden on Thursday signed into law the $1.9 trillion relief package that he said will help the United States defeat the coronavirus and nurse the economy back to health. Some checks to Americans could begin arriving this weekend.

The signing came hours before Biden delivers his first prime-time address since taking office. He is aiming to steer the nation towards a hungered-for sentiment – hope – as he marks one year since the onset of the pandemic, which has killed more than 530,000 Americans.

“This historic legislation is about rebuilding the backbone of this country,” Biden said as he signed the bill in the Oval Office.

Most noticeable to many Americans are provisions providing up to $1,400 in direct payments, some of which could begin landing in bank accounts this weekend, and extending $300 weekly emergency unemployment benefits into early September. Also included are expanded tax credits over the next year for children, child care, and family leave – some of them credits that Democrats have signalled they would like to make permanent – plus spending for renters, feeding programmes, and people’s utility bills.

The House gave final congressional approval to the sweeping package by a near party line 220-211 vote on Wednesday, seven weeks after Biden entered the White House and four days after the Senate passed the bill. Republicans in both chambers opposed the legislation unanimously, characterising it as bloated, crammed with liberal policies and heedless of signs the crises are easing.

Biden originally planned to sign the bill on Friday, but it arrived at the White House more quickly than anticipated.

“We want to move as fast as possible,” tweeted White House chief of staff Ron Klain. He added, “We will hold our celebration of the signing on Friday, as planned, with congressional leaders!”