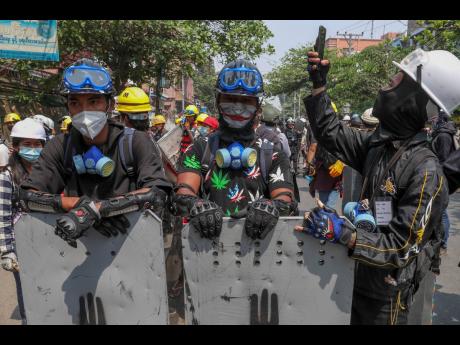 AP
In this March 9, 2021, file photo, anti-coup protesters with makeshift shields take positions while one man looks at his phone in Mandalay, Myanmar.

The images ricochet across the planet, as so many do in this dizzying era of film it, upload it, tell it to the world: scenes from a protest-turned-government crackdown, captured at ground level by smartphone users on the streets of Myanmar.

Images shot across barricades and furtively through windows. From behind bushes and through smudged car windshields. Horizontal video. Vertical video. Video captured by people running towards chaos and away from it. People shouting. People helping. People demanding.

The world is watching violent events unfold in Myanmar for many reasons but perhaps one above all: because it can.

It is a dynamic completely unlike the uprising that spread through the Southeast Asian nation in the pre-Internet, pre-smartphone summer of 1988. Then, when student-led demonstrations were violently put down by the government, cementing Myanmar’s global notoriety as an isolated, repressive state, it took months, even years, for the outside world to understand the full story of what had happened.

This time around, the imagery is plentiful and unsettling. Filmed by participants on the ground and uploaded, sometimes immediately, the protests and crackdowns are reaching millions of handheld devices around the planet, also almost immediately.

It is a vivid example of a technological truism in an age when capturing images has become utterly democratised: If you can glimpse it up close, you’re more likely to pay attention.

“You know the old adage that a picture speaks a thousand words. It makes you feel like, `This is happening, this is true,’” says Kareem El Damanhoury, a media scholar at the University of Denver who is writing a book about visuals in times of conflict.

In Myanmar today, he says: “The images are not just complementing what’s happening. Over time, they become defining of the conflict itself.”