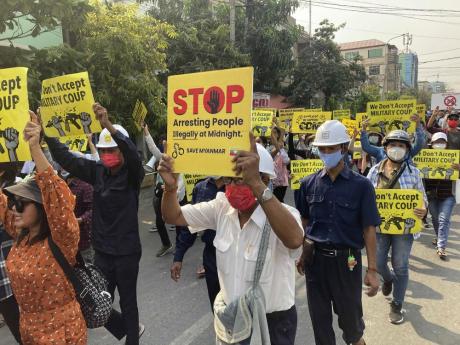 YANGON, Myanmar (AP) — Myanmar’s ruling junta has declared martial law in six townships in the country’s largest city, as security forces killed dozens of protesters over the weekend in an increasingly lethal crackdown on resistance to last month’s military coup.

An initial announcement was made late Sunday saying two other townships — Hlaing Thar Yar and neighbouring Shwepyitha — were being placed under martial law.

At least 38 people were killed Sunday and dozens were injured in one of the deadliest days of the crackdown on anti-coup protesters, according to the Assistance Association for Political Prisoners, or AAPP, an independent group tracking the toll of the violence.

Complicating efforts to organise new protests as well as media coverage of the crisis, mobile Internet service has been cut, though access is still available through fixed broadband connections.

The blockage of Internet service forced postponement of a court hearing in the capital, Natpyitaw, for Myanmar’s detained leader, Aung San Suu Kyi, who was supposed to take part via a video conference, said her lawyer Khin Maung Zaw. Suu Kyi and President Win Myint were detained during the February 1 military takeover, and have been charged with several criminal offences that their supporters believe are politically motivated to keep them locked up.

Since the takeover six weeks ago, Myanmar has been under a nationwide state of emergency, with its civilian leaders ousted and detained, and military leaders in charge of all government.

But Sunday’s announcement was the first use of martial law since the coup and suggested more direct military control of security, instead of local police.

The announcement said that the State Administrative Council acted to enhance security and restore law and order, and that the Yangon regional commander has been entrusted with administrative, judicial and military powers in the area under his command.

The orders cover six of Yangon’s 33 townships, all of which suffered major violence in recent days.