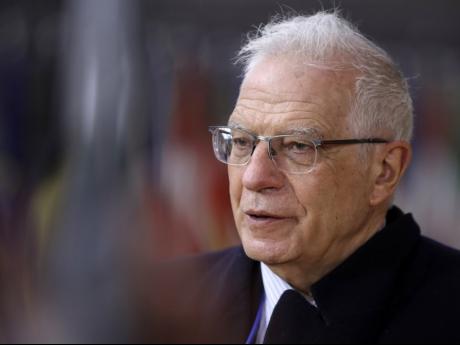 European Union foreign policy chief Josep Borrell speaks with the media as he arrives for a meeting of EU Foreign and Interior ministers at the European Council building in Brussels, Monday, March 15, 2021. (Olivier Hoslet, Pool via AP)

BRUSSELS (AP) — European Union ministers on Monday debated ways to persuade northern African countries to take back migrants denied entry into the 27-nation bloc, as the EU considers making it more difficult for those failing to cooperate to secure European visas.

Migrants arriving in Europe without authorisation routinely lose or destroy their identity documents, or use fake papers, making it hard to work out where they came from and send them home.

Sometimes the countries they live in or transit through are reluctant to take them back.

“We have to work for safe and fair and regular migration. We have to put together incentives in order to make third countries accept the people who have to go back, and to create a flow of regular migration,” EU foreign policy chief Josep Borrell said.

The EU’s executive body, the European Commission, has drawn up a list of how well 39 countries cooperated on readmitting their nationals in 2019.

Foreign and interior ministers weighed Monday what methods the EU can use to improve things.

Commission Vice-President Margaritis Schinas said the ministers agreed that the EU’s work on migration “has to start beyond our borders,” and use policies like trade, development assistance, education, visas, and investment.

Schinas said the aim is to develop “tailor-made, comprehensive and mutually beneficial, win-win partnerships with key countries of origin and transit.”

The use of visas as leverage is part of the European Commission’s overhaul of the EU’s failed asylum and migration policy, which was unveiled in September and aims to ensure that more migrants denied entry into Europe are sent home.

Under the EU’s visa code, the Commission assesses at least once a year how well countries cooperate on readmitting their nationals.

EU member states can also notify the Commission when confronted with “substantial and persistent practical problems” with any country, triggering another assessment.

“It’s time not only to talk but also to act,” EU Home Affairs Commissioner Ylva Johansson said, adding that it’s “important that we use this new tool, together with member states, and I am ready to table proposals based on this already this summer.”

The arrival of well over one million people in 2015, most of them refugees fleeing war in Syria, sparked one of the EU’s biggest political crises as countries bickered over how to manage them.

Migrant arrivals have since fallen to a relative trickle, but the tensions have never really eased.

Only around 40% of migrants refused entry into the EU are actually sent home.