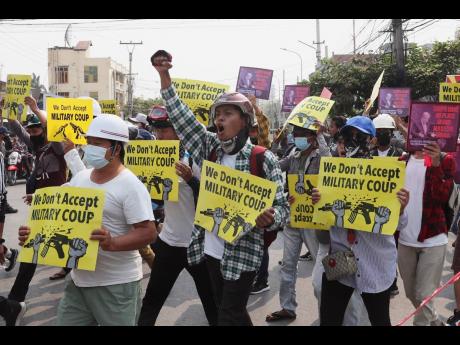 AP
Anti-coup protesters hold signs that read, ‘We don’t accept military coup,’ during a march in Mandalay, Myanmar, on Sunday.

Myanmar’s ruling junta has declared martial law in a wide area of the country’s largest city, as security forces killed dozens of protesters over the weekend in an increasingly lethal crackdown on resistance to last month’s military coup.

The United Nations said at least 138 peaceful protesters have been killed in Myanmar since the Feb. 1 military coup, including at least 56 killed over the weekend.

The developments were the latest setback to hopes of resolving the crisis that started with the military’s seizure of power that ousted the elected government of Aung San Suu Kyi. A grassroots movement has sprung up across the country to challenge the takeover with almost daily protests that the army has tried to crush with increasingly deadly violence.

State broadcaster MRTV said on Monday that the Yangon townships of North Dagon, South Dagon, Dagon Seikkan and North Okkalapa have been put under martial law. That was in addition to two others – Hlaing Thar Yar and neighbouring Shwepyitha – announced late Sunday.

More violence was reported around the country on Monday, with at least eight protesters in four cities or towns killed, according to the independent broadcaster and news service Democratic Voice of Burma.