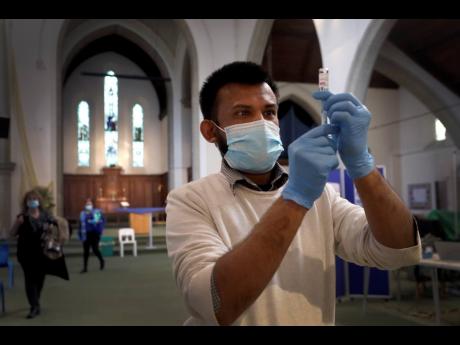 The European Union’s drug regulator insisted Tuesday that there is “no indication” the AstraZeneca vaccine causes blood clots as governments around the world faced the grimmest of dilemmas: push on with a vaccine known to save lives or suspend its use over reports of clotting in some recipients.

The European Medicines Agency urged governments not to halt use of the vaccine at a time when the pandemic is still taking thousands of lives each day. And already there are concerns that even brief suspensions could have disastrous effects on confidence in inoculation campaigns the world over, many of which are already struggling to overcome logistical hurdles and widespread hesitancy about vaccines.

“We are still firmly convinced that the benefits of the AstraZeneca vaccine in preventing COVID-19 with its associated risk of hospitalisation and death outweigh the risk of the side effects,” said Emer Cooke, the head of the agency.

Many scientists have argued that even the loss of a few days in vaccinating vulnerable people could be far costlier than the impact of any rare phenomenon.

But a cascading number of countries have taken a different view and locked away shots from the Anglo-Swedish company, awaiting the results of an EMA review, promised Thursday.

Sweden was the latest to do so Tuesday, choosing caution over speed, even as Cooke insisted “that at present there is no indication that vaccination has caused these conditions.”

Highlighting the difficulty of making such decisions at a time when people are voraciously following the ups and downs of every vaccine candidate, Sweden’s state epidemiologist Anders Tegnell said that the risk, if it existed, was rare but the country’s authorities “have felt compelled to pause AstraZeneca’s vaccine” after receiving ever more reports of blood clots.

Europe has the luxury to be able to pick from several vaccine candidates – but the decision of whether to suspend use of the vaccine is still not an easy one on the continent where the virus has already killed over half a million people, is surging again and where the vaccination campaign has repeatedly stumbled.

The choice may be even more fraught elsewhere because many countries are relying heavily on AstraZeneca, which is cheaper and easier to handle than some other shots. The vaccine has so far played a huge role in the global initiative to ensure vaccines get to poorer countries known as COVAX.

For instance, when Congo decided to hold off on the vaccine, it put its entire campaign on hold before it even began since it has not yet received doses of any other shot. Somalia, by contrast, went ahead with its first shots of AstraZeneca on Tuesday – including one for the health minister, who received the jab publicly to reassure the nation about its safety.

The AstraZeneca shot has already struggled to gain public trust after troubles with reporting of its data and concerns about its effectiveness in older people. More than half of the 15 million AstraZeneca doses delivered to the EU’s 27 member states are still lying in storage, according to data compiled by the European Center for Disease Prevention and Control.

The current debate could further erode confidence in the vaccine – and that skepticism could even spread to others.

“We are worried that there may be an effect on the trust of the vaccines. But our job is to make sure that the products that we authorize are safe,” Cooke said.

The EMA chief noted that thousands of people across the EU develop blood clots every year for a variety of reasons and that there were no reports of increased clotting incidents in the clinical studies of the AstraZeneca vaccine. Still, experts would undertake a “very rigorous analysis” and make a recommendation Thursday.

The difficulty of the decision was clear in Thailand, the first country outside Europe to temporarily suspend use of the AstraZeneca vaccine, only to recant on Tuesday – when its prime minister received a dose.