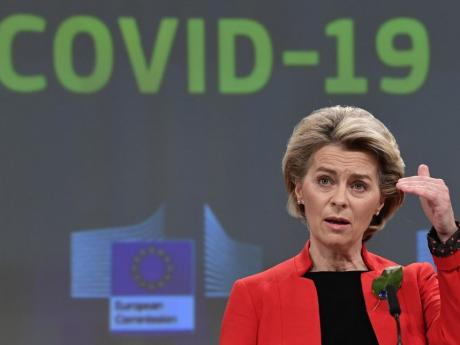 European Commission President Ursula von der Leyen speaks during a media conference on the commission's response to COVID-19 after a meeting of the College of Commissioners at EU headquarters in Brussels, Wednesday, March 17, 2021. The European Commission is proposing Wednesday to create a Digital Green Certificate to facilitate safe free movement inside the EU during the COVID-19 pandemic. (John Thys, Pool via AP)

Von der Leyen said the company originally pledged to deliver 90 million doses of its shot in the first three months of 2021, but later said it could only provide 40 million, then more recently only 30 million.

Beyond criticism for its slow deliveries, notably in Europe, AstraZeneca also has had to deal with reports of dangerous blood clots in some recipients of its shot, although the company and international regulators say there is no evidence the vaccine is to blame.

Several countries, including Germany, France, Italy, and Spain, have suspended its use.

The EU’s drug regulator insisted Tuesday that there is “no indication” it does so, and von der Leyen said Wednesday that “I trust AstraZeneca, I trust the vaccines.”

AstraZeneca’s formula is one of three vaccines in use on the continent. But the escalating concern is another setback for the EU’s vaccination drive, which has been plagued by shortages and other hurdles and is lagging well behind the campaigns in Britain and the US.

For the second quarter of 2021, van der Leyen said, AstraZeneca will only deliver 70 million doses, less than half of the 180 million it was “contractually obliged to deliver.”

Two production sites in the UK figure in the EU’s advance purchasing agreement drawn up with AstraZeneca, she said, adding: “We’re still waiting for doses to come from the UK,” she said.

Von der Leyen also noted the EU has exported around 41 million vaccine doses to other countries.

“But open roads run in both directions, and this is why we need to ensure that there is reciprocity and proportionality,” she said.

“If the situation does not change, we will have to reflect on how to make exports to vaccine-producing countries dependent on their level of openness,” she added, without naming any country.

She said the EU still aims to vaccinate 70% of all adults by September.