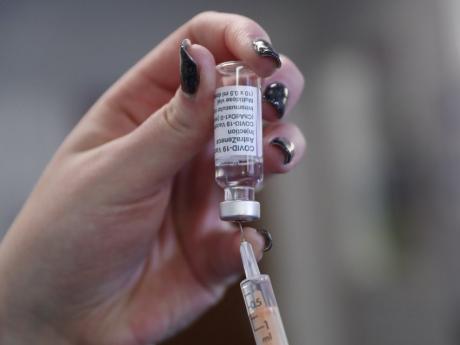 LONDON (AP) — The European Union’s drug regulatory agency said Thursday that the AstraZeneca vaccine doesn’t increase the overall incidence of blood clots and that the benefits of using it outweigh the possible risks, paving the way for European countries to resume dispensing the shots.

Several nations, including Germany, France, Italy, and Spain, had suspended their use of the vaccine over the past week following reports of clots in a few dozen of the millions of people across the continent who have gotten the shot.

The question was whether the vaccine had anything to do with the clots.

Italian Premier Mario Draghi welcomed the finding by a committee of the European Medicines Agency and immediately announced Italy would resume administering AztraZeneca’s vaccine as early as Friday.

Germany, France, and others had said they would wait for the EMA’s determination before deciding whether to start using the vaccine again.

“The committee has come to a clear scientific conclusion,” said the head of the EMA, Emer Cooke.

“This is a safe and effective vaccine.”

She added: “If it were me, I would be vaccinated tomorrow.”

However, she said the agency “still cannot rule out definitively a link” between certain rare types of blood clots and the vaccine.

The EMA recommended adding a description of these cases to the vaccine leaflets so health workers and patients would be aware.

The burgeoning safety questions raised fears that the debate would seriously undermine public confidence in AstraZeneca’s vaccine, which is key to efforts to immunise some of the world’s poorer countries, and further slow the lagging vaccination drive across the 27-nation EU at a critical moment when infections are rising at an alarming rate.

Clots that form in the arms, legs, or elsewhere can break free and travel to the heart, brain or lungs, causing strokes, heart attacks, or other deadly blockages.

In its findings Thursday, the EMA said the overall number of clotting events of various sorts reported since the rollout is lower than what would be expected in the general population.

But those very common clots aren’t the kind causing concern.

Instead, the EMA said it will continue to look closely at two rare types of blood clots.

It cited seven reports of a type that appears in multiple blood vessels and 18 reports of a kind called cerebral venous thrombosis, which occurs in a vein that drains blood from the brain.

That’s out of the 20 million people who have received at least one dose of the AstraZeneca vaccine in Britain and the EU.

Most of those cases were in people younger than 55 and the majority were women, the EMA said.