Protesters fight back amid violent crackdown 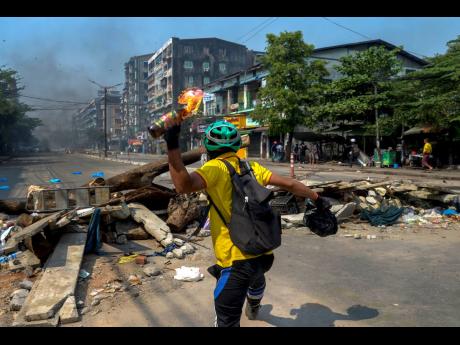 AP
An anti-coup protester throws a molotov cocktail towards police as they move towards the protest area in Yangon, Myanmar, yesterday.

Protesters in Myanmar fired slingshots and threw Molotov cocktails towards lines of security forces after apparently coming under fire Wednesday in a rare incidence of anti-coup demonstrators fighting back against a relentlessly violent crackdown.

The growing resistance comes after one organisation said that more than 200 people have been killed since the February 1 takeover.

At least two people were shot dead during protests Wednesday in Kalay in northwestern Myanmar, according to press and social media posts that included photos of the victims.

Smoke and fires were seen in Kalay and Yangon Wednesday night, reportedly from the authorities burning down barricades protesters had set up during the day.

Protests against the coup that ousted the elected government of Aung San Suu Kyi have shown remarkable staying power and largely remained peaceful, despite curbs on Internet access, the imposition of martial law in some places, and an extraordinarily violent response by police.

Demonstrators have come up with innovative ways to carry on in the face of the violence, including lining up placards as stand-ins for themselves or coconuts painted with the words ‘Spring Revolution’.

But on Wednesday, after security forces apparently shot at them in the country’s largest city of Yangon, demonstrators initially fled – but then crept back to hunker down behind sandbag barricades. Some hurled firebombs, while others took aim with slingshots – though the forces were too far away to be hit.

APPEALING FOR AN END

Pope Francis appealed for an end to the bloodshed on Wednesday.

In an apparent reference to widely broadcast images of a nun in Myanmar, kneeling in the street in front of armed security forces, Francis said: “I, too, kneel on the streets of Myanmar and say: may violence cease.”

Protesters last week in response to increased police violence began taking a more aggressive approach to self-defence – burning tyres at barricades and pushing back when they could against attacks.

A statement issued Sunday by the Committee Representing Pyihtaungsu Hluttaw – an organisation of the elected members of Parliament whom the military barred from taking their seats but who have set themselves up as an alternative government to the junta – announced that the general public has the legal right to self-defence against the security forces. The committee was earlier called a treasonous organisation by the junta, which declared it illegal.