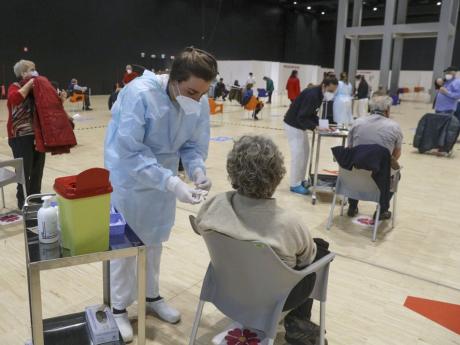 WARSAW, Poland (AP) — Countries across Europe resumed vaccinations with the AstraZeneca shot on Friday, as leaders sought to reassure their populations it is safe following brief suspensions that cast doubt on a vaccine that is critical to ending the coronavirus pandemic.

France’s prime minister rolled up his sleeve to get the vaccine and Britain’s planned to, as did a handful of other senior politicians across the continent where inoculations drive have repeatedly stumbled and several countries are now re-imposing lockdowns as infections rise in many places.

Britain is a notable exception: The outbreak there is receding, and the country has been widely praised for its vaccination campaign, though this week it announced that it, too, would be hit by supply shortages.

European Union countries, by contrast, have struggled to quickly roll out vaccines, and the pause of the AstraZeneca shot by many this week only added to those troubles.

The suspensions came after reports of blood clots in some recipients of the vaccine, even though international health agencies urged governments to press ahead with the shot, saying the benefits outweighed the risks.

On Thursday, the European Medicines Agency said that the vaccine doesn’t increase the overall incidence of blood clots, though it could not rule out a link to a small number of rare clots.

The move paved the way for a slew of European countries including Italy, France, and Germany to begin using the vaccine again.

“It’s clear that the revocation of the suspension is for us a great relief because we have to strongly accelerate the vaccination campaign,” said Dr Giovanni Rezza, the head of prevention at the Italian Health Ministry.

Rezza told reporters in Rome that Italy only reluctantly halted the campaign out of an abundance of caution, but needed to ramp it back up quickly to make up for lost time now.

He said Italy needed to more than double the 200,000 vaccinations per day the country had reached before the suspension to reach its goal of inoculating 80% of the population by September.

Health experts have expressed concern that even though the suspensions were brief, they could still damage confidence in the vaccine at a time when many people are already hesitant to take a shot that was developed so quickly.

While many EU countries have struggled with such reluctance, it’s even more of a worry in developing nations that may not have any other choice of vaccine.

AstraZeneca, which is cheaper and easier to store than many rival products, is the linchpin in vaccination drives in many poorer countries.

Britain never suspended use of AstraZeneca.

Castex, 55, said he stepped up because he wanted to show full confidence in the shot, even though he is not yet eligible under France’s rules.

The former director of the Pasteur Institute, Patrick Berche, told BFMTV the move was “a very beautiful gesture.”

France restarted the vaccine with some restrictions that seemed aimed at reducing the risk of potential side effects even further.

Other countries that are resuming their use of AstraZeneca shots include Bulgaria, a nation of 7 million where only 355,000 people have been vaccinated with a first dose so far — the lowest number in the European Union.