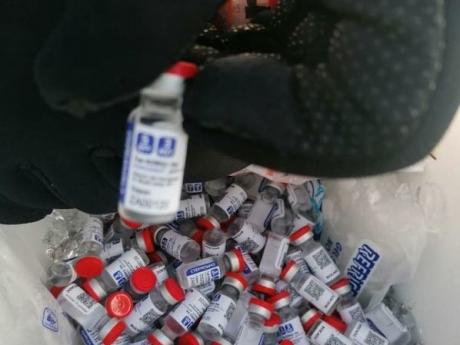 In this photo released by Mexico's tax agency, SAT, on March 17, 2021, officials show vials of seized alleged Sputnik V vaccines for COVID-19 in Campeche, Mexico. RDIF, the Russian entity that paid for the vaccine's development, said these vaccines were fake after Mexican authorities seized them from a private plane en route to Honduras on March 17. (Mexican tax agency SAT via AP)

The seizure came aboard a private plane in the Gulf coast state of Campeche, according to a statement from Mexico’s tax agency late Wednesday.

The crew and Honduran passengers were turned over to the Attorney General’s Office.

Mexican officials did not identify the doses as fake, but the Russian Direct Investment Fund said in a statement Thursday that after reviewing photographs of the packaging, they determined the vaccine to be fake.

“Analysis of the photographs of the seized batch, including the design of containers and labels, suggests that it is a fake substance which has nothing to do with the original vaccine,” according to the RDIF statement.

“The shipment’s procedure was also in violation of packaging and transportation protocols for the official Sputnik V vaccine.”

It said the Russian Health Ministry would cooperate with Mexican authorities to analyse the contents of the vials.

The RDIF also drew geopolitics into the mix, saying, “This is an example of possible provocations against Sputnik V just as Russian officials warned last week.

Russian state-funded news agencies last week cited an anonymous high-ranking Kremlin source saying that “the US and its allies” are plotting “a large-scale information campaign aimed at creating a bias” towards Russian scientific products designed to counter COVID-19.

The source said that the alleged plan is to paint Sputnik V as ineffective and dangerous, including by “staging mass deaths, allegedly as a result of using” the vaccine.