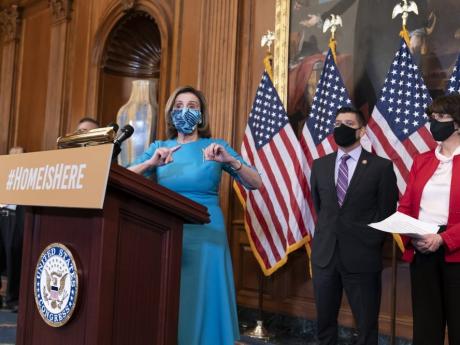 Speaker of the House Nancy Pelosi joined at right by Raul Ruiz, chairman of the House Hispanic Caucus, and Lucille Roybal-Allard discuss the upcoming vote on the American Dream and Promise Act of 2021, a bill to help reform the immigration system, at the Capitol in Washington, Thursday, March 18, 2021. (AP Photo/J. Scott Applewhite)

WASHINGTON (AP) — The House has voted to unlatch a gateway to citizenship for young “Dreamers,” migrant farm workers, and immigrants who have fled war or natural disasters, giving Democrats wins in the year’s first votes on an issue that faces an uphill climb in the Senate.

On a near party-line 228-197 vote Thursday, lawmakers approved one bill offering legal status to around two million “Dreamers,” brought to the US illegally as children, and hundreds of thousands of migrants admitted for humanitarian reasons from a dozen troubled countries.

They then voted 247-174 for a second measure creating similar protections for one million farm workers who have worked in the US illegally.

The government estimates they comprise half the nation’s agricultural labourers.

In a statement after the votes, President Joe Biden called the action a “critical first step” toward a more sweeping overhaul he’s proposed.

He said he wants to work with Congress toward “building a 21st century immigration system that is grounded in dignity, safety, and fairness, and finally enacts the long-term solutions we need to create an orderly and humane immigration system.”

Both bills largely hit a wall of opposition from republicans insistent that any immigration legislation bolster security at the Mexican border, which waves of migrants have tried breaching in recent weeks.

The GOP has accused congressional Democrats of ignoring that problem and Biden of fuelling it by erasing former President Donald Trump’s restrictive policies, even though that surge began while Trump was still in office.

While “Dreamers” win wide public support and migrant farm workers are a backbone of the agriculture industry, both House bills face gloomy prospects in the evenly split Senate. That chamber’s 50 Democrats will need at least 10 GOP supporters to break Republican filibusters.