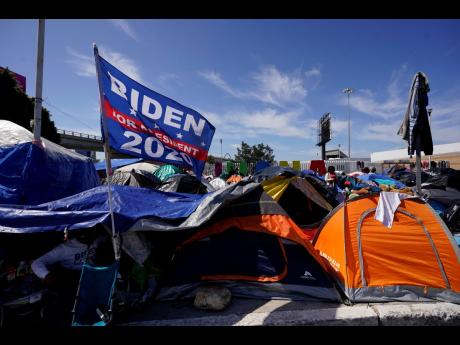 AP
A donated campaign flag for US President Joe Biden flies over tents at a makeshift camp of migrants at the border port of entry leading to the United States on Wednesday, March 17, 2021, in Tijuana, Mexico. The migrant camp shows how confusion has undercut the message from Biden that it’s not the time to come to the United States. Badly misinformed, some 1,500 migrants who set up tents across the border from San Diego harbour false hope that Biden will open entry briefly and without notice. 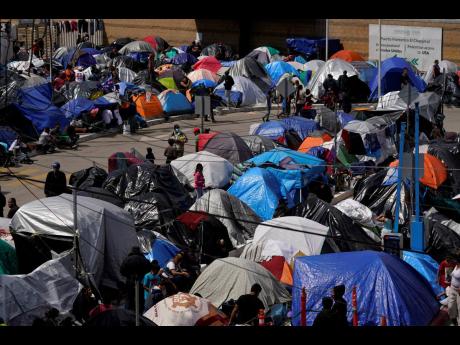 AP
A makeshift camp of migrants sits at the border port of entry leading to the United States, Wednesday, March 17, 2021, in Tijuana, Mexico.
1
2

It took less than a month for 200 tents to fill every spot in a Mexican plaza at the busiest border crossing with the United States.

At the camp in Tijuana, across the border from San Diego, some 1,500 migrants line up for hot meals under a canopy-covered kitchen, children play soccer and volunteers in orange jackets rotate on security patrol. People pay to use the bathroom at a pharmacy or travel agency across the street and to shower at a hotel on the corner.

Badly misinformed, the migrants harbour false hope that President Joe Biden will open entry to the United States briefly and without notice. Or they think he may announce a plan that will put them first in line to claim asylum, though he hasn’t said anything to support that theory.

Biden ended some hard-line border policies of his predecessor, Donald Trump, proposed a pathway to citizenship for people in the US illegally and promised in an executive order to “create a humane asylum system”. But neither he nor his aides have outlined the new approach to asylum or said when it will be unveiled, creating an information void and giving rise to rumours that migrants would be allowed in. Amid sharply higher migration flows, confusion and scepticism surround Biden’s insistence that it’s not the time to come to the border.

“The camp is a centre for disinformation,” said Edgar Benjamin Paz, a Honduran man whose family’s tent is one of the first in an unsanctioned line to seek asylum. “No one knows what’s going on.”

The camp was established after the Biden administration announced on February 12 that asylum-seekers waiting in Mexico for court dates could be released in the United States while their cases wind through the system. It extends only to an estimated 26,000 asylum-seekers with active cases under Trump’s ‘Remain in Mexico’ policy, which Biden halted. As of last Monday, 2,114 people in the programme had been admitted to the US at crossings in San Diego and in the Texas cities of El Paso and Brownsville.

Paz, who fled Honduras with his wife and two children after a gang demanded their accounting business follow its orders, said migrants wrongly interpreted the February announcement to mean that the border was “open”.

US authorities encountered migrants at the border more than 100,000 times in February, the first six-figure total since a four-month streak in 2019. There’s been a surge of families and children travelling alone, who enjoy more legal protections.

Almost everyone at the Tijuana camp has been in Mexico for months or years. They include Haitians who started arriving in Tijuana in 2016 as well as Mexican and Central American families fleeing violence, poverty and natural disasters.

Cristina, a Mexican woman who declined to provide her last name because of fears for her safety, passes days at her tent with her 13- and four-year-old daughters while her husband sells shaved ice. The family sleeps in a rented room at night.

“We want to see if they open up, see if they give us some news, see if they respond to our pleas,” said Cristina, 39, whose family fled violence in Mexico’s Guerrero state and arrived in Tijuana in June. “Nothing is clear.”

Biden, in interview this week with ABC News, said his message to migrants was: “Don’t leave your town or city or community.”

Aides repeatedly note that most people encountered by the Border Patrol are quickly expelled from the US under pandemic-related powers that deny an opportunity to seek asylum.

“We are working to repair what has been an unprepared and dismantled system,” White House press secretary Jen Psaki said last Wednesday when asked about new migrant camps. “It’s going to take some time. Our policy is that we’re obviously going to continue to make sure we’re working through our laws and the border is not open.”

Biden is contending with smugglers whose business relies on convincing people that now is a good time to cross, Republican adversaries promoting a narrative of a border in crisis, and exemptions from pandemic-related expulsions for unaccompanied children and people deemed vulnerable by US authorities.

The rise in children arriving alone has sent authorities scrambling for temporary housing and processing space, including at the Dallas Convention Center.

In Tijuana, Erika Pinheiro, litigation and policy director of Al Otro Lado, a group that provides legal services to migrants, has spoken to crowds at the camp and struggled to dispel disinformation because the Biden administration doesn’t yet have an asylum plan.

“All I can say is they’re coming up with a plan, and they’re working on it, and it’s going to take time,” Pinheiro said.

She wants to say that waiting at the camp won’t help but, expecting pushback, has held off.

People driving by offer clothes and diapers from their car windows. A tiny number of migrants wear donated T-shirts that say, “Biden. Please let us in!” It’s not clear who distributed them. There is a large ‘Biden for President’ flag outside one tent.

Casa de Luz, a support group for LGBTQ migrants in Tijuana, serves two free hot meals a day, down from three when crowds were smaller.

So far, Mexican authorities have given no indication they plan to close the camp. It’s at the entrance to a pedestrian bridge leading to San Diego that has been closed since the pandemic struck.

Ramon Diaz, a 49-year-old Cuban who paid a smuggler US$20,000 to guide him from French Guiana to Tijuana, says the camp is the closest he can get to the United States for now. He’s staying put.

“We don’t know what’s going to happen,” he said. “(Biden) said he was going to help migrants. We have lots of faith in God and in him.”