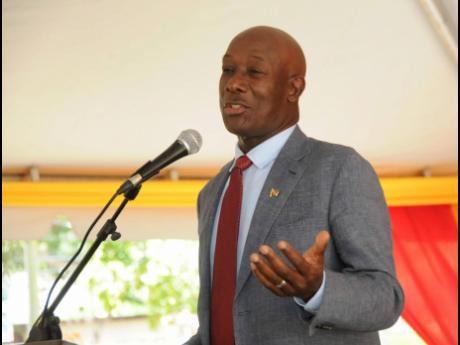 Trinidad and Tobago Foreign and CARICOM Affairs Minister Dr Amery Browne yesterday said he would seek to achieve “a resolution in the shortest possible time” after the Indian High Commissioner to the country, Arun Kumar Sahu, was quoted in the local media as saying that he had been “personally attack[ed]” by statements made by Prime Minister Dr Keith Rowley.

Sahu was responding to statements made by Rowley during his Thursday night ‘Conversation with the Prime Minister’ programme regarding the availability of COVID-19 vaccines that India is reported to have made available to several CARICOM countries as a gift.

Rowley said that he had been informed by the Guyana-based CARICOM Secretariat that the Indian high commissioner in Guyana was reported in the Guyanese media as saying that the vaccines would be made available to the region and that Guyana, Antigua, St Kitts and Nevis, the countries to which that high commissioner was accredited, would receive donations.

Rowley, who also chairs the 15-member regional integration grouping, said that the CARICOM Secretariat informed him that the arrangements were bilateral and that each high commissioner would be responsible to the countries to which he or she is accredited.

“We have an ambassador here in Trinidad, if you are required, as happened in Guyana and the other small islands, to know about this, then we should know about it here and there is a pathway,” the prime minister said.

Rowley said the first time he heard about the vaccine was from local doctors whom Sahu had spoken to, adding that the diplomat “did not speak to the Government about it”.

Rowley said it was also being said that Trinidad and Tobago did not access those vaccines because of where it was being made, telling the programme “all of a sudden it’s not that small countries being left out of the market and availability but it became an issue of race”.

The main opposition United National Congress (UNC) has been accusing the government of being tardy in its response to acquiring vaccines from India, but Rowley insisted that Trinidad and Tobago will acquire vaccines under the COVAX facility, which is being administered by the World Health Organization and the Pan American Health Organization.

Opposition Leader Kamla Persad-Bissessar has accused the government of not positioning the island to receive some of the vaccines sent by India.

The government later rebuked Persad-Bissessar after she wrote to the Prime Minister of India, Narendra Modi, on behalf of Trinidad and Tobago requesting vaccines.

Trinidad and Tobago has recorded 140 deaths from the virus and more than 7,000 infections and Rowley warned that the country cannot afford a second lockdown as there will be no money available to fund it.