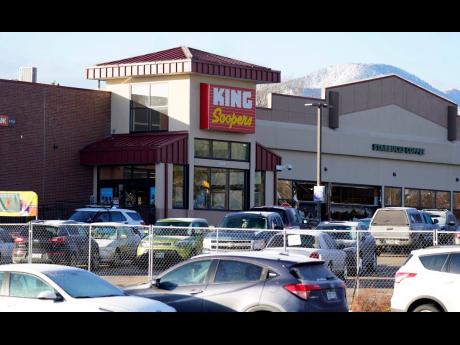 AP
A makeshift fence stands around the parking lot outside a King Soopers grocery store on Tuesday, March 23, where a mass shooting took place a day earlier in Boulder, Colorado.

Three were gunned down while putting in a day’s work at a Colorado supermarket. Another was a police officer, who raced in to try to rescue them and others from the attack that left 10 dead.

A picture of the victims of Monday’s shooting began to emerge as the suspect in the killings remained hospitalised on Tuesday, but was expected to be booked into jail on murder charges.

Those who lost their lives at the King Soopers store in Boulder ranged from 20 years old to 65.

Leiker, Olds and Stong worked at the supermarket, said former co-worker Jordan Sailas, who never got the chance to bring his baby son into the store to meet them.

Olds’ grandmother choked up on the phone as she described the young woman she played a large role in raising.

“She was just a very kind and loving, bubbly person who lit up the room when she walked in,” said Jeanette Olds, 71, of Lafayette, Colorado.

Talley joined the police force in Boulder in 2010 with a background that included a master’s degree in computer communications, his father said.

“At age 40, he decided he wanted to serve his community,” Homer ‘Shay’ Talley, 74, told The Associated Press from his ranch in central Texas. “He left his desk job. He just wanted to serve, and that’s what he did. He just enjoyed the police family.”

Officer Talley was the first to arrive after a call about shots being fired and someone carrying a rifle, Boulder Police Chief Maris Herold said.

Boulder County District Attorney Michael Dougherty said Talley was “by all accounts, one of the outstanding officers” in the department.

With seven children, ages 7 to 20, Talley was a devoted father who “knew the Lord,” his father said.

“When everyone else in the parking lot was running away, he ran towards it,” Shay Talley said.

“We know where he is,” he added. “He loved his family more the anything. He wasn’t afraid of dying. He was afraid of putting them through it.”