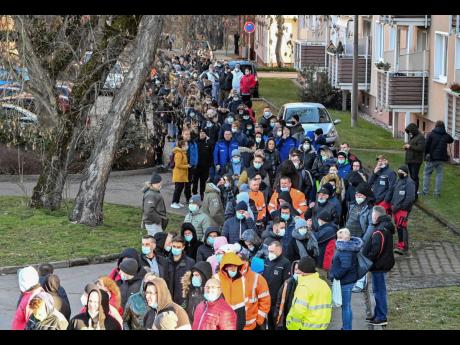 AP
Polish commuters stand in a line and wait for a coronavirus test at the Stadtbruecke border crossing between Germany and Poland in Frankfurt an der Oder, Germany, on Monday, March, 22. Poland is being classified as a ‘high-risk’ COVID-19 area by German authorities, and people crossing into Germany from Poland must provide a negative coronavirus test.

Poland recorded its highest daily number of new coronavirus infections on Wednesday as hospitals buckle under a new surge. Hungary has the highest per capita death rate in the world. And Romanian doctors are working around the clock and having to decide who does – and doesn’t – get a bed in an intensive care unit (ICU).

The coronavirus pandemic is unleashing enormous suffering as infection rates rise across central Europe, even as the Czech Republic and Slovakia – recently among the worst-hit areas in the world – are finally seeing some improvements following tight lockdowns.

In Poland, officials say this “third wave” of the pandemic is driven by the highly contagious virus variant first detected in Britain, which now makes up most of the new cases. The country’s vaccine roll-out is happening far too slowly to hold back this powerful wave of illness and deaths.

Polish Prime Minister Mateusz Morawiecki, warning that the worst is yet to come, said the country will have even stricter restrictions for a two-week period before and after Easter. This comes with the country already in a nationwide lockdown that has closed non-essential shops and sent all schoolchildren into remote learning.

Poland’s healthcare system is under greater pressure now than at any time in the pandemic. Polish media this week have reported on hospitals so overwhelmed that they are forced to put extra beds in corridors. Maternity wards have been suddenly turned into COVID-19 wards, forcing women to change plans for where they will be giving birth. At least one hospital director has banned staff from taking vacations.

Ambulances in Poland have been waiting for hours in front of hospitals to unload their patients or have had to transport patients to distant facilities.

Morawiecki said younger people – those under 50 and even some under 40 — are making up a larger share of those hospitalized than ever before. Among them now is 49-year-old Warsaw Mayor Rafal Trzaskowski, who unsuccessfully challenged President Andrzej Duda in an election last year.

In Hungary, a surge of infections has produced the highest death rate per one million inhabitants in the world in recent days, and daily record-breaking numbers of COVID-19 patients being treated in hospitals has led to a severe strain on the country’s healthcare system.

That comes even though Hungary is among the European Union countries with the highest vaccination rates, thanks to its reliance on Chinese and Russian vaccines, in addition to those approved by the EU.

In Romania, record high numbers of patients in ICUs have been recorded on consecutive days this week.

“This is the most pressure we’ve felt,” said Roxana Patulea, a 28-year-old ICU doctor at the Ploiesti Emergency Jupiter Hospital and Bucharest University Emergency Hospital.