China outlines COVID-origin findings, ahead of WHO report 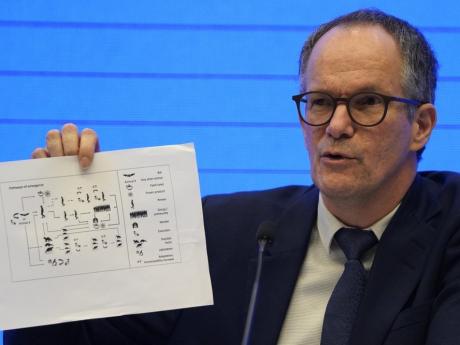 In this February 9, 2021, file photo, Peter Ben Embarek of the World Health Organization team holds up a chart showing pathways of transmission of the virus during a joint press conference held at the end of the WHO mission in Wuhan in central China's Hubei province. Chinese officials briefed diplomats Friday, March 26, 2021, on the ongoing research into the origin of COVID-19, ahead of the expected release of a long-awaited report from the World Health Organization. (AP Photo/Ng Han Guan, File)

BEIJING (AP) — Chinese officials briefed diplomats Friday on the ongoing research into the origin of COVID-19, ahead of the expected release of a long-awaited report from the World Health Organization.

The briefing appeared to be an attempt by China to get out its view on the report, which has become enmeshed in a diplomatic spat.

The US and others have raised questions about Chinese influence and the independence of the findings, and China has accused critics of politicising a scientific study.

“Our purpose is to show our openness and transparency,” said Yang Tao, a Foreign Ministry official.

“China fought the epidemic in a transparent manner and has nothing to hide.”

The report, which has been delayed repeatedly, is based on a visit earlier this year by a WHO team of international experts to Wuhan, the city in central China where infections from a new coronavirus were first reported in late 2019.

The experts worked with Chinese counterparts, and both sides have to agree on the final report.

It’s unclear when it will come out.

Feng Zijian, a Chinese team member and the deputy director of China’s Center for Disease Control and Prevention, said the experts examined four possible ways the virus got to Wuhan.

They are: a bat carrying the virus infected a human, a bat infected an intermediate mammal that spread it to a human, shipments of cold or frozen food, and a laboratory that researches viruses in Wuhan.

The experts voted on the hypotheses after in-depth discussion and concluded one of the two animal routes or the cold chain was most likely how it was transmitted. A lab leak was viewed as extremely unlikely, Feng said.

His remarks were reported by state broadcaster CCTV, which said envoys from 50 countries and the League of Arab States and the African Union attended the briefing at the Foreign Ministry.

“China firmly opposes certain countries’ attempts to politicise the origin tracing issue and make groundless accusations and hold China accountable,” the ministry said in an online post about the briefing.

Separately, Foreign Ministry spokesperson Hua Chunying said, “I would like to stress that virus tracing is a scientific issue that should be studied by scientists through cooperation.”

She told reporters that the experts are still discussing the contents and translation of the report, and she did not know when it would be released.

At a press briefing later Friday in Geneva, the World Health Organization expert who led WHO’s China mission said the nearly 400-page report was finalised and in the process of being fact-checked and translated.

“I expect that in the next few days, that whole process will be completed and we will be able to release it publicly,” WHO expert Peter Ben Embarek said.

At a Biden administration health briefing Friday, US CDC Director Dr Rochelle Walensky said the agency was looking forward to the release of the WHO report.

Dr Anthony Fauci said the explanation that “most public health officials agree with” about how COVID-19 appeared in humans is that the virus was likely spreading in China below the radar for several weeks, allowing it to be well adapted by the time it was recognised.