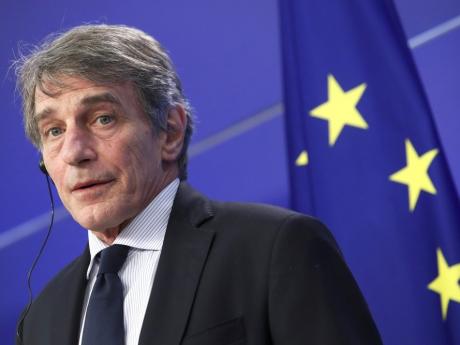 European Parliament President David Sassoli speaks during a media conference at the European Parliament on the sidelines of an EU summit in Brussels, Thursday, March 25, 2021. European Union leaders are looking for ways of ramping up COVID-19 vaccination across the region during their virtual meeting Thursday amid a shortage of doses, spikes of new coronavirus cases, a feud with the United Kingdom, and internal quarrels. (Yves Herman, Pool via AP)

BRUSSELS (AP) — European Union leaders failed to settle a fight about the distribution of COVID-19 shots among member states Thursday but pledged to strengthen vaccine export controls and production on EU soil amid a shortage of doses and spikes in new cases.

Austrian Chancellor Sebastian Kurz criticised the allocation of shots in the EU, saying that some countries were receiving more than their fair share at the cost of others.

As the leader of a coalition of six countries, he demanded a correction mechanism, raising tensions between capitals from where the leaders were holding their remote summit.

“When member states have a lot less vaccines available to them than others, then I think this is a big issue for Europe,” Kurz said.

"This could cause damage to the European Union like we haven’t seen in a long time.”

At the end of the summit, the EU’s 27 nations were still locked in a dispute over how an upcoming batch of 10 million doses could be allocated to narrow the vaccine gap between member states and the leaders decided to push the talks to a future meeting of their ambassadors.

Under the joint procurement programme set up by the European Commission, doses are allocated on a pro rata basis, but some nations are taking less than their share.

A large majority of EU members think the system is working well but said some nations made a mistake to focus on AstraZeneca shots instead of diversifying their vaccine portfolios.

AstraZeneca shots are cheaper and easier to handle than vaccines from Pfizer-BioNTech or Moderna but the Anglo-Swedish company has been at loggerheads with the bloc over repeated failures to deliver doses agreed in their contract.

The spread of more contagious virus variants has pushed hospitals in some EU countries to their limit.

That, combined with the lack of vaccines available in Europe, has pushed several EU nations to impose strict lockdown measures over the Easter holidays.

Three months after vaccination campaigns started, Our World In Data showed that only 14% of the EU’s 450 million residents have had a shot, while the figure stood at 46% in Britain.

An EU source said while the bloc had allowed 21 million vaccine doses to be exported to the UK since December 1, while none had come to the EU from Britain.

“We can see clearly that British facilities are producing for Great Britain,” said German Chancellor Angela Merkel, yet she joined Dutch Prime Minister Mark Rutte in seeking to calm the choppy waters between both sides.

“We also want to assume a win-win situation here, that is, we want to act in a politically sensible way because it is in part somewhat more complicated than one thinks at first glance.”

Rutte said that talks with the UK on getting a more equitable share of vaccines would resume Saturday.