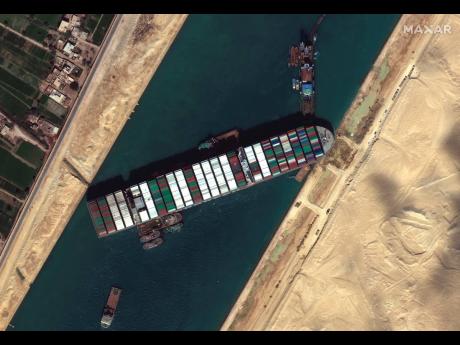 AP
This satellite image from Maxar Technologies shows the cargo ship MV Ever Given stuck in the Suez Canal near Suez, Egypt, Saturday, March 27, 2021.

Two additional tugboats sped Sunday to Egypt’s Suez Canal to aid efforts to free a skyscraper-sized container ship wedged for days across the crucial waterway, even as major shippers increasingly divert their boats out of fear the vessel may take even longer to free.

The massive Ever Given, a Panama-flagged, Japanese-owned ship that carries cargo between Asia and Europe, got stuck Tuesday in a single-lane stretch of the canal. In the time since, authorities have been unable to remove the vessel and traffic through the canal – valued at over US$9 billion a day – has been halted, further disrupting a global shipping network already strained by the coronavirus pandemic.

The Dutch-flagged Alp Guard and the Italian-flagged Carlo Magno, called in to help tugboats already there, reached the Red Sea near the city of Suez early Sunday, satellite data from MarineTraffic.com showed. The tugboats will nudge the 400-metre-long (quarter-mile-long) Ever Given as dredgers continue to vacuum up sand from underneath the vessel and mud caked to its port side, said Bernhard Schulte Shipmanagement, which manages the Ever Given.

Workers planned to make two attempts Sunday to free the vessel coinciding with high tides, a top pilot with the canal authority said.

“Sunday is very critical,” the pilot said. “It will determine the next step, which highly likely involves at least the partial offloading of the vessel.”

Taking containers off the ship likely would add even more days to the canal’s closure, something authorities have been desperately trying to avoid. It also would require a crane and other equipment that have yet to arrive.

The pilot spoke to The Associated Press on condition of anonymity as he wasn’t authorised to brief journalists.