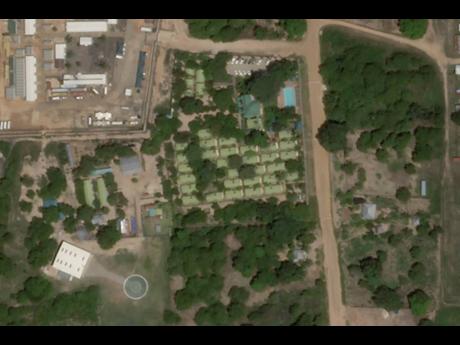 AP
This satellite photo from Planet Labs Inc shows the Amarula Palma hotel (centre) with its helipad below (left) in Palma, Mozambique.

Thousands were estimated to be missing from the town, which held about 70,000 people before the attack began last Wednesday.

The Islamic State group claimed responsibility Monday for the attack, saying it was carried out by the Islamic State Central Africa Province, according to the SITE extremist monitoring group.

The rebel claim said the insurgents now control Palma’s banks, government offices, factories and army barracks, and that more than 55 people, including Mozambican army troops, Christians and foreigners were killed. It did not provide further detail on the dead.

Earlier this month, the United States declared Mozambique’s rebels to be a terrorist organisation and announced it had sent military specialists to help train the Mozambican military to combat them.

Palma is the centre of a multibillion-dollar investment by Total, the France-based oil and gas company, to extract liquified natural gas from offshore sites in the Indian Ocean. The gas deposits are estimated to be among the world’s largest and the investment by Total and others is reported to be $20 billion, one of the largest in Africa.

The battle for Palma forced Total to evacuate its large, fortified site a few miles outside of the city.

The fighting spread across the town Monday, according to Lionel Dyck, director of the Dyck Advisory Group, a private military company contracted by the Mozambican police to help fight the rebels.

“There is fighting in the streets, in pockets across the town,” Dyck told The Associated Press. The Dyck group has several helicopter gunships in Palma which have been used to rescue trapped civilians and to fight the rebels.

“My guys are airborne and they’ve engaged several little groups and they’ve engaged one quite large group,” Dyck said. “They’ve landed into the fight to recover a couple of wounded policemen. We have also rescued many people who were trapped, 220 people at last count.”

He said those rescued were taken to Total’s fortified site on the southern African country’s Afungi peninsula, where chartered flights flew many south to Pemba, the capital of Cabo Delgado province.

“This attack is not a surprise. We’ve been expecting Palma to be whacked the moment the rains stopped and the fighting season started, which is now,” he said.