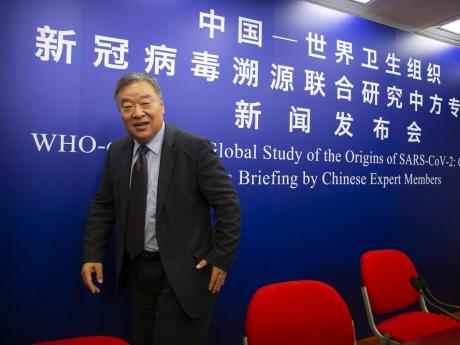 Liang Wannian, the Chinese co-leader of the joint China-WHO investigation into the origins of the COVID-19 pandemic, leaves after a press conference in Beijing, Wednesday, March 31, 2021. Chinese health officials pushed Wednesday for expanding the search for the origins of COVID-19 beyond China, one day after the release of a World Health Organization report on the issue. (AP Photo/Mark Schiefelbein)

BEIJING — Chinese health officials are pushing to expand the search for the origins of the coronavirus beyond China, one day after the release of a closely watched World Health Organization report on the issue.

They also are rejecting criticism that China didn’t give the international experts on the WHO team access to enough data when they visited the city of Wuhan earlier this year.

The search for the origins of the virus has become a diplomatic feud.

The US and other Western nations have repeatedly raised questions about delays, transparency, and data access, while China has promoted theories that suggest the virus may have come from elsewhere.

Liang Wannian, the head of the Chinese team that worked with the WHO group of experts, says the experts agreed that the place where the first case was identified is not necessarily where the virus emerged.

“Based on this scientific consensus, we should have a broader viewpoint in terms of sourcing,” he said.

Experts agree the virus could have come from elsewhere, with neighbouring countries in Southeast Asia a prime possibility.

The WHO report concluded that the virus was most likely carried by a bat, which infected another animal that infected a human.

Researchers haven’t been able to trace the bat or the intermediate animal yet, but suspicion has fallen on bat habitats in southwest China or nearby Southeast Asia.