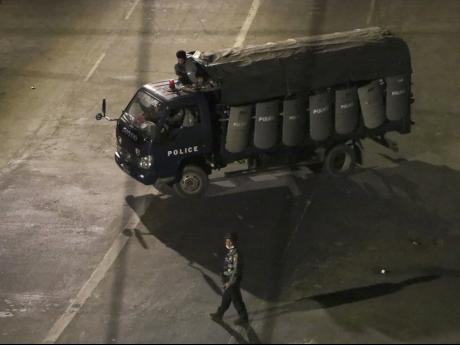 Police patrol on a truck along Hledan road at Kamaryouk township in Yangon, Myanmar, Thursday, April 1, 2021. Protesters in Myanmar on Thursday marked two months since the military seized power by again defying the threat of lethal violence and demonstrating against its toppling of the country's democratically elected government. (AP Photo)

YANGON, Myanmar (AP) — Myanmar’s wireless broadband Internet services were shut down on Friday by order of the military, local providers said, as protesters continued to defy the threat of lethal violence to oppose the junta’s takeover.

A directive from the Ministry of Transport and Communications on Thursday instructed that “all wireless broadband data services be temporarily suspended until further notice,” according to a statement posted online by local provider Ooredoo.

After weeks of overnight cutoffs of Internet access, the military on Friday shut all links apart from those using fiberoptic cable, which was working at drastically reduced speeds.

Access to mobile networks and all wireless — the less costly options used by most people in the developing country — was blocked.

The Norwegian telecoms company Telenor, one of the biggest carriers in Myanmar, confirmed it could no longer offer wireless services.

It was offering fiberoptic service of up to 40 megabits per second in its packages as of Friday, well below high-speed access, which is a minimum of 100 Mbps.

The government has shut down all but a handful of fully military-controlled media outlets.

Some of those banned or whose operations have been suspended have continued to publish via social media or whatever methods they can find.

Facebook announced it was providing a safety feature to enable users in Myanmar to beef up security settings locking their profiles to prevent access by non-friends.

That includes preventing non-friends from enlarging, sharing, or downloading full-size profile and cover photos and seeing any posts on a person’s timeline.

Facebook and other major social media platforms have banned members of the Myanmar military, also known as the Tatmadaw, and are blocking ads from most military-linked commercial entities.

The UN Human Rights Office for Southeast Asia called on countries in the region “to protect all people fleeing violence and persecution in the country” and “ensure that refugees and undocumented migrants are not forcibly returned,” UN spokesman Stephane Dujarric told reporters in New York.

The UN Security Council late Thursday strongly condemned the use of violence against peaceful protesters.

The press statement was unanimous but weaker than a draft that would have expressed its “readiness to consider further steps,” which could include sanctions. China and Russia, both permanent Council members and both arms suppliers to Myanmar’s military have generally opposed sanctions.

The statement came after the UN special envoy for Myanmar warned the country faces the possibility of civil war and urged significant action be taken or risk it spiralling into a failed state.