UK arrests over 100 in protests against policing bill 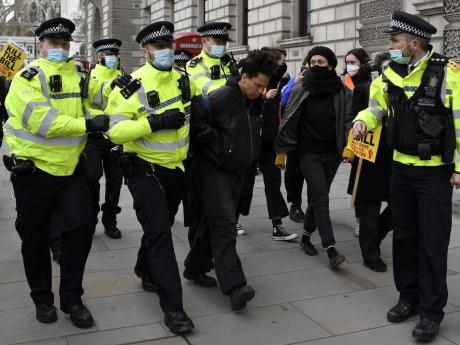 Police detain a man for blocking traffic at Parliament Square during a 'Kill the Bill' protest in London, Saturday, April 3, 2021. The demonstration is against the contentious Police, Crime, Sentencing and Courts Bill, which is currently going through Parliament and would give police stronger powers to restrict protests. (AP Photo/Alberto Pezzali)

Thousands marched in towns and cities across the country on Saturday to protest the Police, Crime, Sentencing and Courts Bill, defying coronavirus restrictions.

Police said the “Kill the Bill” protests were mostly peaceful and most of those taking part observed social distancing.

They said a small number of people were intent on causing disruptions, and that those arrested committed alleged offences including violent disorder, assaulting police officers, and breaches of coronavirus legislation.

The force said 10 officers had been injured, though none of the injuries was believed to be serious.

The proposed legislation would give police in England and Wales more powers to impose conditions on non-violent protests, including those deemed too noisy or a nuisance, with those convicted liable to fines or jail terms.