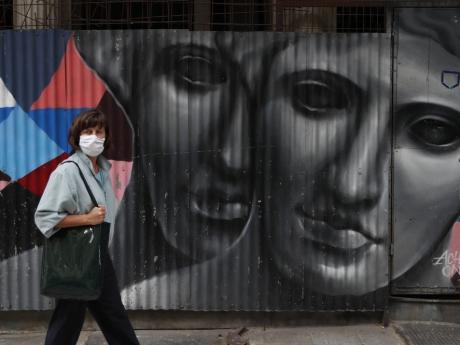 A woman wearing a face mask to protect from the spread of coronavirus stands in front of a graffiti by the Greek artist Achilles in Athens, Tuesday, April 6, 2021. Lockdown measures have been in force since early November but an ongoing surge in COVID-19 infections remains high as the country battles to emerge from a deep recession. (AP Photo/Thanassis Stavrakis)

ATHENS, Greece (AP) — Kits for self-administered coronavirus tests began arriving in Greek pharmacies Wednesday, with each resident entitled to one free of charge per week as part of efforts to tackle a surge of coronavirus cases and hospitalisations.

Priority for the home tests is initially being given to teachers and high school students aged 16-18, as authorities contemplate reopening schools, at least for certain grades.

Greece’s committee of medical experts handling coronavirus issues was meeting Wednesday, and an announcement on whether and under what conditions schools will reopen was expected in the evening.

Alternate Health Minister Vassilis Kontozamanis said distribution of the tests to the population would begin on Thursday.

The tests involve simple nasal swabs and are easily carried out without the need for a healthcare professional, he noted.

Addressing complaints reported by some pharmacists that the tests had arrived in packages of 25 instead of as individual kits, forcing pharmacists to repackage them for distribution, Kontozamanis said future shipments would be in individual packaging.

Greece has been under lockdown-type restrictions since early November and schools have been shut for most of the time since then, although they briefly reopened for a few weeks earlier this year.

Only special education schools have remained open throughout.

Authorities have been debating reopening schools, particularly for the final grades of high school, where students are preparing for university entrance exams.

Health officials have said students who don’t carry out the self-test and have a declaration signed by their parents confirming a negative result won’t be allowed to attend classes.

Anyone testing positive will have to declare it on a government website and will have to undergo a repeat PCR test.

Despite restrictions on movement and gatherings and the closures of bars, restaurants and retail stores for months, coronavirus cases have been surging in Greece.

Hospitals are under strain and many intensive care units are at capacity.

The country of 11 million people announced a record number of daily cases Tuesday, with 4,309 new confirmed cases and 79 deaths, bringing the total number of deaths to more than 8,530.

Despite the surge, retail stores in most of the country reopened Monday on an appointment-only basis.

Cafes, restaurants and bars remain shut and are allowed to operate on a takeout or delivery basis only, while a 9 p.m. to 5 a.m. curfew remains in place and people are allowed to leave home only for specific reasons and after sending a text message to authorities or carrying a self-declaration form.

Masks are compulsory in all public indoor and outdoor areas.

But after five months of restrictions, many are openly flouted and crowds outside cafes and bars serving drinks in plastic cups have become common in the evenings.