Greece recommends AstraZeneca vaccine for age 30 and up 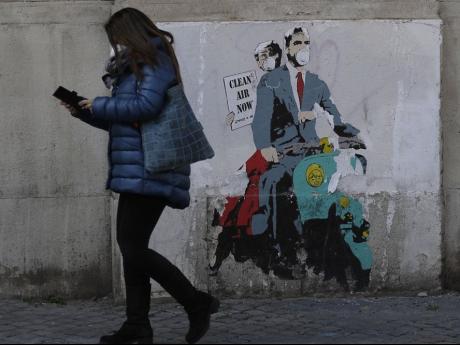 A woman walks past a poster depicting a scene from the famed movie " Roman Holiday" with Gregory Peck and Audrey Hepburn wearing surgical masks as riding a Lambretta scooter in Rome, Friday, April 9, 2021. Italy has seen a stabilising of the new variant-fueled infections over the past three weeks, though its daily death count remains stubbornly high, averaging between 300-500 COVID-19 victims per day, and its ICU capacity for virus patients is well over the threshold set by the government. (AP Photo/Gregorio Borgia)

ATHENS, Greece — Greece’s national vaccination committee has announced it is recommending the AstraZeneca vaccine continue to be administered to people 30 and older, saying the risk of serious illness or death from COVID-19 far outweighs that of someone developing an extremely rare blood clotting disorder due to the vaccine.

The committee’s announcement adds to the varying advice regarding the AstraZeneca vaccine coming from different European countries.

The European Medicines Agency has not advised on setting any age restrictions on use of the AstraZeneca vaccine.

The vaccination committee in Greece said Friday it was recommending “the continuation of the vaccination programme with every available vaccine, including the AstraZeneca vaccine, in people aged 30 and over.”

But hospital admission rates have been increasing as well, and intensive care units in many parts of Greece are at or over capacity, despite the country being under lockdown-type measures since early November.