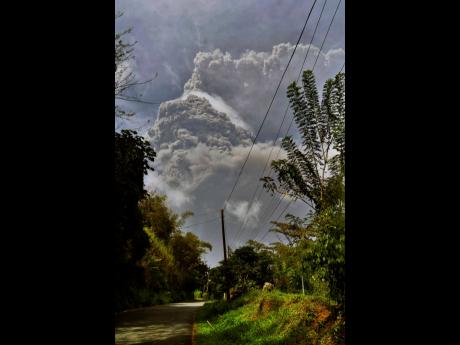 AP
Plumes of ash rise from the La Soufriere volcano as it erupts on the eastern Caribbean island of St. Vincent, as seen from Chateaubelair on Friday, April 9. 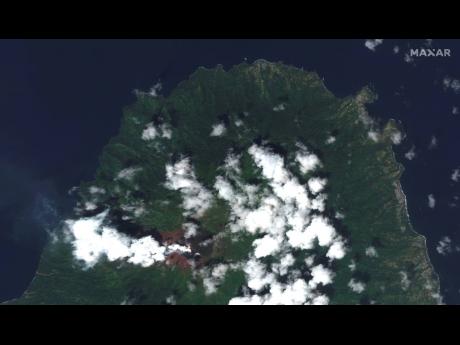 AP
This image provided by Maxar Technologies shows La Soufriere volcano on the Caribbean island of St Vincent, Thursday, April 8, 2021, the day before it erupted. 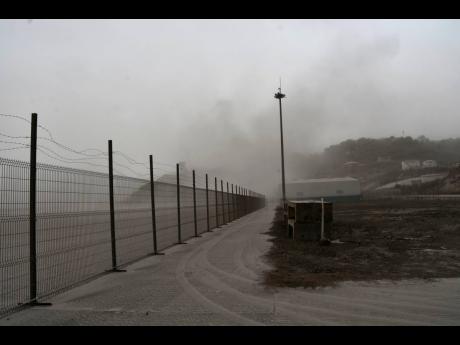 AP
A road is blanketed in volcanic ash at the international airport in Kingstown, on the eastern Caribbean island of St Vincent, on Saturday, April 10, 2021 due to the eruption of La Soufriere volcano.
1
2
3

Ash rained down across the eastern Caribbean island of St Vincent on Saturday and a strong sulphur smell enveloped communities a day after a powerful explosion at La Soufriere volcano uprooted the lives of thousands of people who evacuated their homes under government orders.

Lush green Caribbean villages were transformed into gloomy, grey versions of Alpine villages under a blanket of fine soot, which also hung in the air, obscuring the sun and creeping into homes, cars and noses.

Some ash fell as far away as Barbados, about 120 miles (190 kilometres) east of St Vincent.

Some people taped their doors and windows and swept repeatedly outside their homes while watching for another burst from the volcano.

“We’re hearing rumbling from here and witnessed the lightning flashes last night,” said Rukersha Jackson, a 22-year-old marketing specialist who lives with her family a little outside the evacuation zone, which covered the northern third of the island.

Nearby nations, including Antigua and Guyana, have offered help by either shipping emergency supplies or temporarily opening their borders to the roughly 16,000 evacuees fleeing ash-covered communities with as many personal belongings as they could stuff into suitcases and backpacks.

Cruise ship lines offered to help some of the evacuees leave the island, though that was not expected to happen before Monday.

Meanwhile, at least a few ash-covered evacuees escaped the area Saturday in small boats, heading to other parts of the main island.

The volcano, which last had a sizeable eruption in 1979, kept rumbling and experts warned that explosions could continue for days or weeks. A previous eruption in 1902 killed some 1,600 people.

“The first bang is not necessarily the biggest bang this volcano will give,” Richard Robertson, a geologist with the University of the West Indies’ Seismic Research Center, said during a news conference.

Conditions for many worsened overnight as ash covered homes, cars and streets and even the runway of the airport east of the capital, Kingstown, at the opposite end of the roughly 20-mile (30-kilometre) long island from the volcano’s crater.

St Vincent island holds almost 90 per cent of the land in a 32-island nation, St Vincent and the Grenadines, that as a whole covers roughly as much territory as Denver, Colorado.

Most of the country’s more than 100,000 people live around the capital.

Prime Minister Ralph Gonsalves told NBC Radio, a local station, that officials were trying to figure out the best way to collect and dispose of the ash.

“It’s difficult to breathe,” Gonsalves said, adding that while the volcano’s venting has diminished, a big plume of ash and smoke remained. “What goes up, must come down.”

He asked people to remain calm, have patience and keep protecting themselves from the coronavirus as he celebrated that no deaths or injuries were reported after the eruption.

“Agriculture will be badly affected, and we may have some loss of animals, and we will have to do repairs to houses, but if we have life, and we have strength, we will build it back better, stronger, together,” he said.

Gonsalves has said that it could take up to four months for life to return to normal. Some 3,200 people were staying in 78 government shelters while four empty cruise ships floated nearby, waiting to take other evacuees to nearby islands. Those staying in shelters were tested for COVID-19, and anyone testing positive would be taken to an isolation centre.

The first explosion occurred Friday morning, a day after the government ordered mandatory evacuations based on warnings from scientists who noted a type of seismic activity before dawn on Thursday that meant magma was on the move close to the surface.

An ash column burst more than 33,000 feet (7 kilometres) into the sky, with lightning crackling through the still-towering cloud late Friday.

Chellise Rogers, who lives in the community of Biabou, a zone considered safe, said she could hear continuous rumbling.

“It’s exhilarating and scary at the same time,” she said. “(It’s the) first time I am witnessing a volcano eruption.”

The ash forced the cancellation of several flights and poor visibility limited evacuations in some areas. Officials warned that St Lucia and Grenada could see light ashfall as the 4,003-foot (1,220-metre) volcano continued to rumble. The majority of ash was expected to head northeast into the Atlantic Ocean.

La Soufriere previously had an effusive eruption in December, prompting experts from around the region to fly in and analyse the formation of a new volcanic dome and changes to its crater lake, among other things.

The eastern Caribbean has 19 live volcanoes, including two underwater near the island of Grenada. One of those, Kick ‘Em Jenny, has been active in recent years. But the most active volcano of all is Soufriere Hills in Montserrat. It has erupted continuously since 1995, razing the capital of Plymouth and killing at least 19 people in 1997.