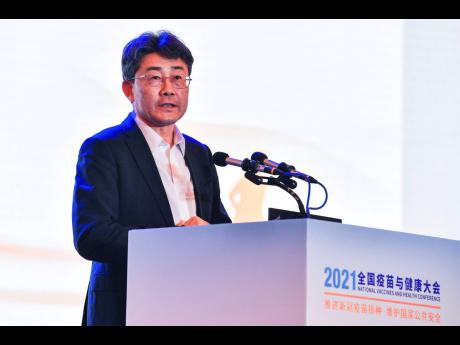 AP
Gao Fu, director of the China Centers for Disease Control, speaks at the National Vaccines and Health conference in Chengdu in southwest China’s Sichuan province.

In a rare admission of the weakness of Chinese coronavirus vaccines, the country’s top disease control official says their effectiveness is low and the government is considering mixing them to get a boost.

Chinese vaccines “don’t have very high protection rates,” said the director of the China Centers for Disease Control, Gao Fu, at a conference Saturday in the southwestern city of Chengdu.

Beijing has distributed hundreds of millions of doses abroad while trying to promote doubt about the effectiveness of the Pfizer-BioNTech vaccine made using the previously experimental messenger RNA, or mRNA, process.

“It’s now under formal consideration whether we should use different vaccines from different technical lines for the immunization process,” Gao said.

Officials at a news conference Sunday didn’t respond directly to questions about Gao’s comment or possible changes in official plans. But another CDC official said developers are working on mRNA-based vaccines.

Gao did not respond to a phone call requesting further comment.

“The mRNA vaccines developed in our country have also entered the clinical trial stage,” said the official, Wang Huaqing. He gave no timeline for possible use.

Experts say mixing vaccines, or sequential immunisation, might boost effectiveness. Researchers in Britain are studying a possible combination of Pfizer-BioNTech and the traditional AstraZeneca vaccine.

The coronavirus pandemic, which began in central China in late 2019, marks the first time the Chinese drug industry has played a role in responding to a global health emergency.

Vaccines made by Sinovac, a private company, and Sinopharm, a state-owned firm, have made up the majority of Chinese vaccines distributed to several dozen countries including Mexico, Turkey, Indonesia, Hungary, Brazil and Turkey.