Over 80 protesters killed by security forces 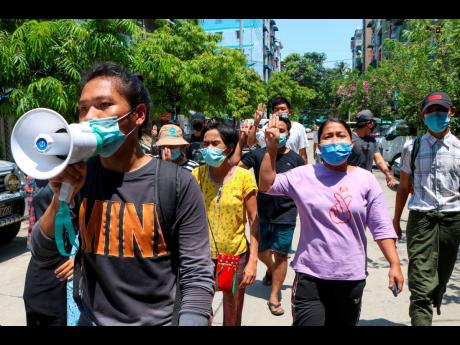 AP
Young demonstrators flash the three-fingered symbol of resistance as they march in Yangon, Myanmar, Saturday, April 10. Security forces in Myanmar cracked down heavily again on anti-coup protesters Friday even as the military downplayed reports of state violence.

The Assistance Association for Political Prisoners (AAPP) monitoring group and Myanmar Now news outlet said on Saturday that 82 people were killed during the protest against the February 1 military coup in the country. Military and police forces began attacks on the protesters early morning, using guns, bombs, and other heavy weapons, causing many casualties.

The human rights group says that as of Saturday, 701 people have died since the military coup.

In a statement issued on Saturday night, the UN office in Myanmar criticised the military repression in Bago, demanding that the security forces stop the violence immediately and allow the wounded to receive treatment.

On February 1, Myanmar’s military seized power in the country, announcing a one-year state of emergency and vowing to take action against alleged voter fraud during the November 8 general election.

Protests broke out in Myanmar against the coup. People hit the streets, demanding the restoration of civilian government.

In response, the security forces have used rubber bullets and live rounds to break up rallies and detained thousands of activists.

International powers have voiced anger and dismay at the junta’s brutal approach, and imposed sanctions on key officials.