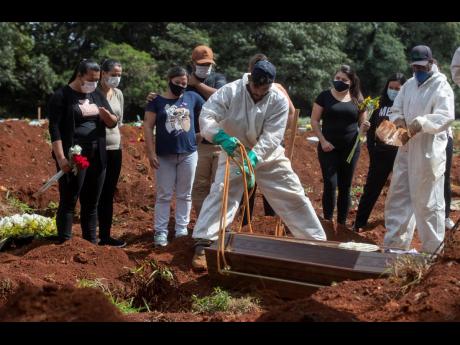 AP
People attend the burial of a relative who died from complications related to COVID-19 at the Vila Formosa cemetery in São Paulo, Brazil, Wednesday, April 7.

April is shaping up to be Brazil’s darkest month yet in the pandemic, with hospitals struggling with a crush of patients, deaths on track for record highs and few signs of a reprieve from a troubled vaccination program in Latin America’s largest nation.

The health ministry has cut its outlook for vaccine supplies in April three times already, to half their initial level, and the country’s two biggest laboratories are facing supply constraints.

The delays also mean tens of thousands more deaths as the particularly contagious P.1 variant of COVID-19 sweeps Brazil. It has recorded about 350,000 of the 2.9 million virus deaths worldwide, behind only the U.S. toll of over 560,000.

Brazil’s seven-day rolling average has increased to 2,820 deaths per day, compared with the global average of 10,608 per day, according to data through April 8 from Johns Hopkins University.

The death toll is forecast to continue rising in the next two weeks to an average of nearly 3,500 per day before receding, according to the University of Washington’s Institute for Health Metrics and Evaluation.

Public health experts blame President Jair Bolsonaro for refusing to enact strict measures to halt infections and for clashing with governors and mayors who did.