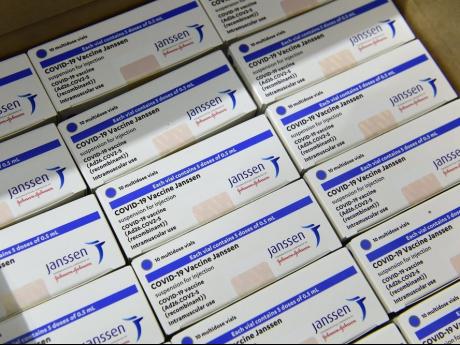 Boxes of Janssen vaccines sit at a warehouse of Hungaropharma, a Hungarian pharmaceutical wholesale company in Budapest, Hungary, after the arrival of the first batch of the Johnson & Johnson, US-made one-dose vaccine against the new coronavirus in the country Tuesday, April 13, 2021. The first shipment contains 28 thousand doses of Janssen. (Szilard Koszticsak/MTI via AP)

South Africa has given more than 289,000 doses of the J&J vaccine to the country’s health workers without any reports of rare blood clots, Health Minister Dr Zweli Mkhize told reporters.

He said South Africa was halting the use of J&J jabs “out of an abundance of caution” and expected that questions over the J&J vaccine should “be cleared within a matter of days.”

Mkhize said “in the unlikely event” that the J&J vaccines are permanently halted, South Africa would continue with its vaccination campaign in May using doses from Pfizer-BioNTech.

Earlier, Johnson & Johnson said it was delaying the rollout of its coronavirus vaccine across Europe amid the US probe, a move that experts worried could further shake vaccine confidence and complicate worldwide COVID-19 immunisation efforts.

The announcement came after regulators in the United States said they were recommending a “pause” in the single-dose shot to investigate reports of rare but potentially dangerous blood clots.

“We have made the decision to proactively delay the rollout of our vaccine in Europe,” Johnson & Johnson said.

The delay is a further blow to vaccination efforts in the European Union, which have been plagued by supply shortages, logistical problems and concerns over unusual blood clots in a small number of people who received the AstraZeneca vaccine.

The blood clot reports prompted several countries in the 27-nation bloc to limit the AstraZeneca vaccine to older people.

The bloc’s drug regulator, the European Medicines Agency, has authorised the AstraZeneca shot for all people 18 and over.

Both the J&J and AstraZeneca vaccines use a cold virus, called an adenovirus, to carry the coronavirus’ spike gene into the body, prompting an immune response.

Johnson & Johnson uses a human adenovirus to create its vaccine, while AstraZeneca uses a chimpanzee version.

In a statement Tuesday, the Centers for Disease Control and Prevention and the Food and Drug Administration said they were investigating six cases of unusual clots, including one death, that occurred six to 13 days after vaccination with the J&J shot.

The FDA commissioner said she expected the pause to last a matter of days.

The European Medicines Agency said it is “currently not clear” whether the J&J shot caused the rare clotting disorders.