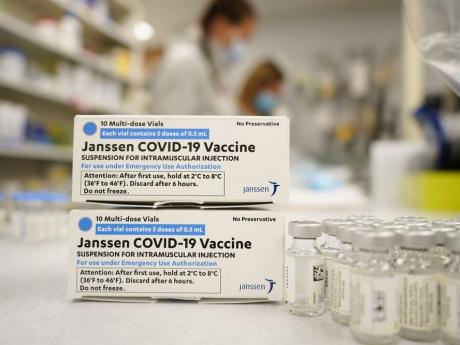 In this March 6, 2021, file photo, boxes stand next to vials of Johnson & Johnson COVID-19 vaccine in the pharmacy of National Jewish Hospital for distribution in east Denver. The drug maker decided Tuesday, April 13, to delay deliveries to Europe after the American regulator recommended a pause in the vaccine's use in the United States while very rare blood clot cases are examined. (AP Photo/David Zalubowski, File)

BARCELONA, Spain (AP) — Desperate to jumpstart Europe’s sluggish vaccination programme, leaders from across the continent scrambled Wednesday in the wake of an unexpected delay in the rollout of Johnson & Johnson’s COVID-19 shots amid reports of very rare blood clots.

While some European Union countries opted for caution, Poland said that it would go ahead and administer the first batch of 120,000 doses that had arrived.

Others like Spain and Portugal were left without a choice: They are still waiting for their first deliveries.

The Johnson & Johnson vaccine, distributed in Europe by its subsidiary Janssen, is a key part of the continent’s immunisation campaign.

Of the four vaccines currently approved in the EU, it is the only one that requires just a single dose to be fully effective.

That makes it ideal for hard-to-reach, vulnerable groups, such as those who are homeless or migrant workers.

But the drug maker decided Tuesday to delay deliveries to Europe after the American regulator recommended a pause in the vaccine’s use in the United States while the rare clot cases are examined.

That is only the latest blow to the vaccine rollout in Europe, which had already experienced a similar blood clot scare with the AstraZeneca vaccine, also critical to its campaign.

It’s not clear if the exceedingly rare reports in the US — so far, six cases out of about seven million inoculations — really are linked to the vaccine.

But European regulators already have declared that the unusual type of clots are possibly linked to the AstraZeneca shot, which is made in a similar way and is in wide use around the globe, though not yet in the US.

Several countries have imposed restrictions on how AstraZeneca is used because of the clot concerns.

Still, experts agree COVID-19 poses a much larger risk of death and hospitalisation than the potential threat of atypical clots.

But the concerns could still undermine public confidence in these vaccines and in the entire vaccination effort.

On Wednesday, advisers to the US Centers for Disease Control and Prevention will debate how to handle the Johnson & Johnson vaccine.

The European Medicines Agency, which approved the vaccine last month, has yet to react to its counterpart’s move across the Atlantic.

For Poland, that means there is no reason to wait.

“In line with these recommendations (by the EMA), we will want to use it in inoculations,” Polish Health Minister Adam Niedzielski said.

Other countries, however, decided to hold up.