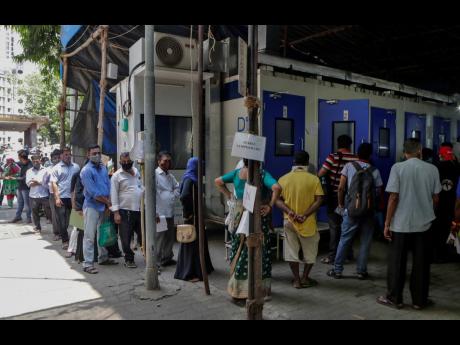 AP
People line up for COVID-19 test in Mumbai, India, yesterday. The country of almost 1.4 billion people is seeing a crippling surge of infections that is threatening to overwhelm hospitals in hard-hit cities.

The Indian city of Pune is running out of ventilators as gasping coronavirus patients crowd its hospitals. Social media is full of people searching for beds, while relatives throng pharmacies looking for antiviral medicines that hospitals ran out of long ago.

The surge, which can be seen across India, is particularly alarming because the country is a major vaccine producer and a critical supplier to the UN-backed COVAX initiative. That programme aims to bring shots to some of the world’s poorest countries. Already the rise in cases has forced India to focus on satisfying its domestic demand – and delay deliveries to COVAX and elsewhere, including the United Kingdom and Canada.

India said Tuesday that it would authorise a slew of new vaccines, but experts said that the decision was unlikely to have any immediate impact on supplies available in the country. For now, its focus on domestic needs “means there is very little, if anything, left for COVAX and everybody else”, said Brook Baker, a vaccines expert at Northeastern University.

Pune is India’s hardest-hit city, but other major metropolises are also in crisis, as daily new infections hit record levels, and experts say that missteps stemming from the belief that the pandemic was “over” are coming back to haunt the country.

When infections began plummeting in India in September, many concluded the worst had passed. Masks and social distancing were abandoned, while the government gave mixed signals about the level of risk. When cases began rising again in February, authorities were left scrambling.

“Nobody took a long-term view of the pandemic,” said Dr Vineeta Bal, who studies immune systems at the city’s Indian Institute of Science Education and Research. She noted, for instance, that instead of strengthening existing hospitals, temporary sites were created. In Pune, authorities are resurrecting one of those makeshift facilities, which was crucial to the city’s fight against the virus last year.

India is not alone. Many countries in Europe that saw declines in cases are experiencing new surges, and infection rates have been climbing in every global region, partially driven by new virus variants.