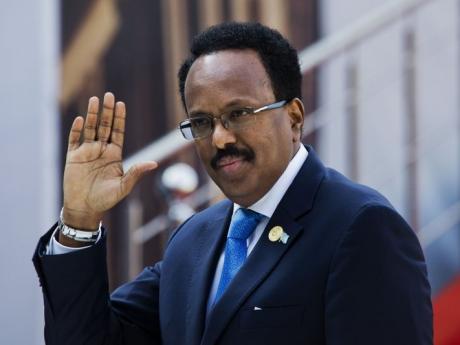 In this Saturday, May 25, 2019, file photo, Somalia's President Mohamed Abdullahi Mohamed arrives for the swearing-in ceremony of Cyril Ramaphosa at Loftus Versfeld stadium in Pretoria, South Africa. Somalia's parliament on Monday, April 12, 2021, voted to effectively extend the mandate of the president and federal government by two years in an attempt to end a political crisis after national elections were delayed in early February. (AP Photo/Jerome Delay, File)

MOGADISHU, Somalia (AP) — Somalia’s president has defiantly signed into law an extension of his mandate and that of his government as the United States and others threatened sanctions and warned of further instability in one of the world’s most fragile countries.

The standoff prolongs a months-long election crisis after the February national vote was delayed.

The international community had objected to a mandate extension and warned that the al-Qaida-linked al-Shabab extremist group could take advantage of the country’s heated political divisions.

The president late Tuesday signed the controversial law after the lower house of parliament this week voted to effectively extend his mandate for two years while calling for direct elections during that time.

Leaders of the Senate, however, called the vote illegal and Somalia’s opposition protested.

The US is “deeply disappointed,” Secretary of State Antony Blinken said in a statement overnight that threatened the possibility of sanctions, visa restrictions and a reevaluation of “our bilateral relations.”

The statement called for Somalia’s federal government and regional states to urgently return to talks on the election crisis.

The European Union had warned that signing this week’s decision into law would divide Somalia and “constitute a grave threat to the peace and stability of Somalia and its neighbours,” and it threatened to consider “concrete measures” in response.

Britain said this week’s move “undermines the credibility of Somalia’s leadership” and it threatened to work with international partners to “reevaluate our relationship and the nature of our assistance to Somalia.”

In response, Somalia’s foreign ministry said it was concerned by “misleading and alarmist statements” by some international partners, and accused them of “inciting the Somali people against their legitimate government.”

The statement added that Somalia will “reject any attempts to use the humanitarian assistance to blackmail the country,” without giving details.

Somalia relies heavily on outside aid to feed, shelter and care for a large population displaced by insecurity and climate shocks, as well as to train and equip its security forces.

In the latest deadly attack, at least 14 people were killed when their minibus struck an explosive device in Jirada Gololey north of the capital, Mogadishu, police spokesman Sadaq Adan Ali said.

Just the day before, Somali security forces had safely defused five explosives along that road, he said.

In the capital, frustration deepened over the political chaos.