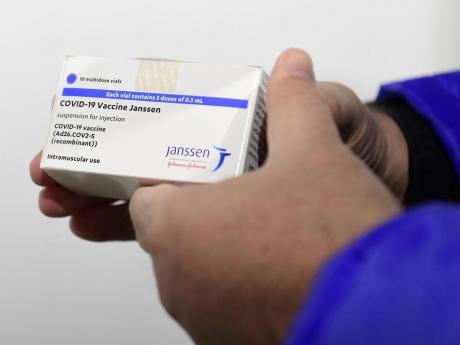 In this April 13, 2021, file photo, a box of Johnson & Johnson vaccine is shown by pharmacist Zsolt Szenasi at a warehouse of Hungaropharma, a Hungarian pharmaceutical wholesale company, in Hungary.

LONDON (AP) — Experts at the agency that regulates drugs for the European Union said Tuesday that they found a “possible link” between the Johnson & Johnson COVID-19 vaccine and very rare blood clots after a small number of cases were reported in the United States, but they confirmed the vaccine’s benefits still outweighed the very small risks of recipients developing the unusual clots.

The European Medicines Agency said a warning about the rare blood clots should be added to labels for Johnson & Johnson’s COVID-19 vaccine.

The agency said these rare blood disorders should be considered as “very rare side effects of the vaccine.”

European officials said they considered all currently available evidence from the US, which consisted of eight reports of serious cases of rare blood clots associated with low blood platelets, including one death.

Last week, J&J halted its European rollout of its one-dose vaccine after the US Food and Drug Administration recommended officials pause its use while the rare blood clot cases are examined.

Officials identified six cases of the highly unusual blood clots among nearly seven million people who were immunised with the shot in the US.

Johnson & Johnson advised European governments to store their doses until the EU drug regulator issued guidance on their use; widespread use of the shot in Europe has not yet started.

The delay was a further blow to vaccination efforts in the European Union, which have been plagued by supply shortages, logistical problems, and concerns over unusual blood clots also in a small number of people who received the AstraZeneca COVID-19 vaccine.

Last week, South Africa suspended its use of the vaccine in the wake of the US pause, and countries including Italy, Romania, the Netherlands, Denmark and Croatia put their J&J doses into storage.

The blood clots linked to the J&J vaccine are occurring in unusual parts of the body, such as veins that drain blood from the brain.

Those patients also have abnormally low levels of blood platelets, a condition normally linked to bleeding, not clotting.