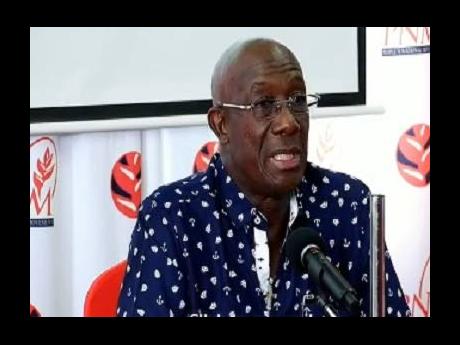 The statement from the Office of the Prime Minister said that Rowley, 71, was tested on Monday for COVID-19 “and the results remain positive”.

Rowley had first tested positive for the virus on Tuesday, April 6.

“Dr Rowley will remain in isolation at the official residence in Blenheim and under the care and supervision of the medical professionals from the Tobago Regional Health Authority,” the statement said.

On Sunday, Rowley, who is in isolation in Tobago, defended his administration’s policy from opposition United National Congress (UNC) criticism.

Writing on his Facebook page, Rowley said on Sunday night he saw opposition legislator Rudranath Indarsingh “apparently stumbling to read an attack on the latest rollback of selected national activities on the day when we reported almost record levels of infection in community spread of the COVID-19 virus”.

He said Indarsingh claimed “we should not have any of these restrictions because they will destroy the economy,” adding “what do they think an explosion of COVID-19 sickness will do, protect and expand the economy?”

“If we don’t do any disruption now, as the UNC is demanding, will the economy be better off in a full-blown COVID-19 takeover, eventually requiring full-scale lockdown as some countries are currently experiencing?”

Indarsingh told a news conference on Sunday that while the government has said that COVID-19 has crashed the economy, the UNC maintains it is the poor economic decisions which led to the current state of the economy.

“The spikes in COVID-19 cases must be placed at feet of the prime minister and his cabinet, who decided not to implement any lockdown until after the Easter holidays, knowing fully well of the projected heightened activity in Tobago, as reports were that guesthouses and flights were booked.

“The prime minister stood by and played God, knowing that travel to Tobago would have risk not just for Tobago, but for the entire country. Our view is that they deliberately ignored dangers associated with the Easter weekend in the face of increased economic activity, and we are of the opinion that this ignoring of what was the reality was because an election in Tobago was imminent,” the opposition legislator said.