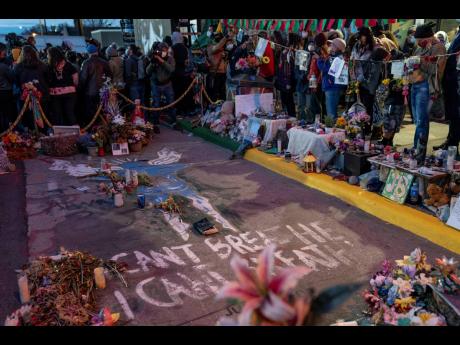 AP
Demonstrators gather around the pavement where George Floyd was murdered outside Cup Foods to celebrate the conviction of former Minneapolis police officer Derek Chauvin in his death on Tuesday in Minneapolis.

The guilty verdict in the trial over George Floyd’s death was not just celebrated in America. It signalled hope for those seeking racial justice and fighting police brutality on the other side of the Atlantic and beyond, where Black Lives Matter has also become a rallying cry.

But the fight is far from over, activists, victims’ families and others in Europe and South Africa said on Wednesday.

A Minneapolis jury on Tuesday found ex-police officer Derek Chauvin guilty on all counts of murder and manslaughter in the May 2020 death of Floyd, whose final words, “I can’t breathe,” reverberated across the world.

“The name of George Floyd today brings this hope, this hope of a country that listens to its people,” said Assa Traore, a leading voice among those in France denouncing alleged police brutality and urging racial justice for the nation’s large Black and North African population.

Traore, who spoke in an interview with The Associated Press, has been seeking justice since the 2016 death of her younger brother, who died in police custody after a chase. The death was not filmed and its cause has been fiercely disputed. Assa Traore led a massive Black Lives Matter protest that drew tens of thousands on to the streets of Paris following Floyd’s death last May.

Malcolm Baker, a spokesperson for the UK chapter of Black Lives Matter, said that while the Chauvin verdict came as a relief and an inspiration for many, Britain still has a lot to do to combat decades of systemic racism against Black people. He cited a 2017 independent report concluding that Black people and ethnic minorities are more harshly treated at every juncture of Britain’s criminal justice system.

“Clearly, the killing of George Floyd resonated with people in Britain and elsewhere in Europe,” Baker said. But resolving the problem does not stop with convictions, he argued, because “there is no evidence that convicting police officers will reduce racist police violence”.

He said the swelling Black Lives Matter protests in 2020 were, above all, “about putting the police and prison system on trial”.

“It is time to move on from talk of reform to truly rethinking policing as currently practised in the US and elsewhere,” said Michelle Bachelet. Floyd’s death emphasises just how much must still be done “to reverse the tide of systemic racism that permeates the lives of people of African descent,” she said.

“The fight for justice goes on,” Bachelet said.

The verdict in the Chauvin trial has special resonance in post-apartheid South Africa,

What was a “landmark judgment” for the US is important for South Africa, too, said William Gumede, chairman of the Democracy Works Foundation promoting good governance in Africa.

“Despite the end of apartheid nearly three decades ago, we are still working to establish a truly non-racial justice system,” he said. The verdict “will inspire South Africans to press for similar accountability here”.